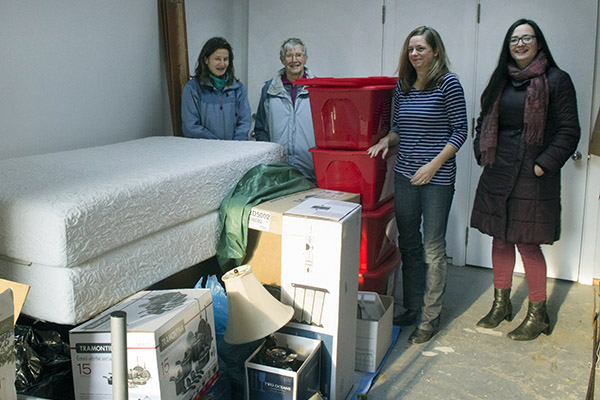 At least 19 Syrian refugees will find their way to Toronto because of the work of local groups and churches in the midtown area.

“In the past we did it on our own as the Leaside United Church but we said we should be telling our story both internally and externally and see if we can involve the community,” Bob Lister said.

The Listers and their group raised enough money to sponsor two families of six. That is over the $70,000 required by the government but the group is providing the families more because the cost of living in Toronto is higher.

They feel the government is low-balling the costs for this city. “If you lived out in the country it might work,” Elisabeth Lister said.

Naomi Buck and a group of parents from the Davisville Village area have partnered with Rosedale United Church, raising $50,000 — enough to sponsor a family of seven. Buck says joining with the church made the process of sponsoring much easier.

“They are the licensed sponsorship agreement holder, meaning they did a whole bunch of paperwork on our behalf,” Buck said. “They have been sponsoring refugees for the last 15 years, they have a good track record and they understand the system.”

This is the 10th sponsorship the Listers have spearheaded through the Leaside United Church, bringing in refugees from seven different countries — the sort of experience Buck is referring to. Even with the help of the church, Buck says there is still a number things the group had to take care of before being approved as a sponsor.

“The government of Canada insists on $27,000, so once you hit that number you are eligible to apply for a family,” Buck said. “Also every member of the group has to do a basic training session and they have to get police clearance forms which is not complicated.”

Through the Leaside United Church the Listers and their committee have brought in families from Iran, Iraq, Sri Lanka, Guatemala and a few others. Bob Lister says the only criteria for their help is that they are humans who need help.

“It is safe to assume we’ll be getting a Muslim family but it doesn’t matter, as long as they are human beings in need, religion plays no part in our evaluation of who we take,” Bob Lister said.