“Even when his team would play hockey and they’d be assigned another dressing room, he’d always go and change in dressing room number five because he felt it helped them win the game,” Bell-LeNoury said. “He was a bit superstitious.”

Bell-LeNoury and others now hope to have the dressing room renamed after their late friend. On March 27, the 52-year-old Creighton died of a massive heart attack — only 30 minutes after speaking at a friend’s funeral.

“He had just finished delivering the eulogy for another one of their friends, Bob Quick, who passed away of lung cancer,” Bell-LeNoury said.

Creighton was a true Leasider. Born and raised in the area, he went to elementary school at Bessborough Drive and attended Leaside High School. He went on to found Leader Petroleum, a business that he owned and operated in the neighbourhood.

He was also an active man and avid hockey fan. Creighton played organized hockey up until last year when one of his knees gave out. His fitness level made his death that much more of a shock.

“This is a man who didn’t drink, didn’t smoke, walked everyday, maybe carried an extra 10 or 15 pounds but was basically in good shape,” Bell-LeNoury said.

Creighton is survived by his wife, Sandy, and their 13-year-old daughter Allie. Sandy had been the one dealing with heart problems and recently underwent surgery on her aortic valve.

“I’m pleased to report that she has come through her operation with flying colours and she was released from the hospital yesterday and is back at home recovering,” Bell-LeNoury said in late May.

On June 2, family and friends will be holding a fundraising event at Originals restaurant at 1660 Bayview Ave. starting at 7 p.m. The event will feature a live band, door prizes and a raffle. All proceeds will go toward expanding Leaside Gardens Arena, which has requested $25,000 for the naming rights to dressing room five.

“Because he was such a big hockey fan we asked people if they would donate money to the Leaside Arena expansion project and they have raised a sizable sum of money already, about $15,000,” Bell-LeNoury said.

Tickets for the event can be purchased at the door. Bell-LeNoury said that 100 tickets have already been sold and that there has been a huge outpouring of support.

“I think that he would be humbled and honoured,” she said. “To be honest, I think that he’d be kind of blown away that his friends and neighbours cared so much.”

Fundraising in the dark 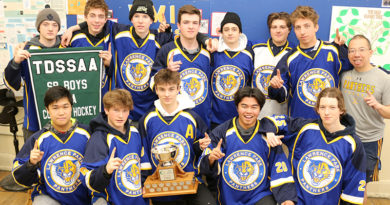