For incoming Crescent School headmaster Mike Fellin, the new position has been a lifetime in the making.

The current assistant head of the Bayview Avenue institution’s upper school has spent his entire teaching career at boys’ schools. He arrived at Crescent School three years ago, from Neil McNeil.

Founded in 1913, Crescent School is an all-boys school with 700 students attending grades 3 through 12. The building is situated on 30 acres just north of Lawrence Avenue East.

Fellin, 39, who is also currently finishing up a doctorate in divinity at University of Toronto, looks to the “formative time” as a St. Mike’s student as pivotal in making the decision “that was what I had to do with my life in terms of teaching boys.”

“Just having outstanding teachers, role models and coaches who went above and beyond in getting to know me — building that relationship, having high standards, setting very clear expectations and encouraging me to thrive — that I think really allowed me to ignite when I was an older adolescent,” he said. “Short of having that, I’m not sure what I’d be doing.”

Fellin will start as headmaster in September, where he’s looking forward to a series of challenges, including filling the shoes of outgoing headmaster, Geoff Roberts.

“He’s someone who’s given his life to this school,” Fellin said. “I have great admiration for his leadership.

“I think it’s going to be a great challenge to succeed him and continue the very fine work he has enabled at this school.”

Roberts, likewise, had words of praise for Fellin.

“He is a very fine gentleman and highly respectful of the school’s values, which we continue to honour, and that’s very important to me,” said Roberts, who started his teaching career at Crescent School in 1978.

He said he believes Fellin is just the fit the school was looking for in a new headmaster, because he “embodies the values of the school.”

“The board didn’t want a revolution here,” he said. “They wanted an appropriate evolution.”

Roberts is technically retiring at the end of this school year. Still focusing on “moving the school forward” until he leaves, he says he has not yet begun considering the various opportunities to fill the void that 35 years at Crescent School will leave behind.

“We all find meaning in our work, and it gives us an extraordinary boost, but I need to force myself to find meaning in a different space,” he said. “I will most certainly miss the joy and busy-ness of the school.

“It’s a really happy place to be.”

Fellin says when he takes over in September he plans to be the role model and source of encouragement that he had in his high school days.

“That’s going to be a challenge, I think, in terms of being a head who is a relational head, as someone who can cross over doing work with parents, faculty and donors,” he said.

“But also with the kids and ensuring their voice is heard and accounted for, as we make important decisions about the next strategic plan and the direction of the school.” 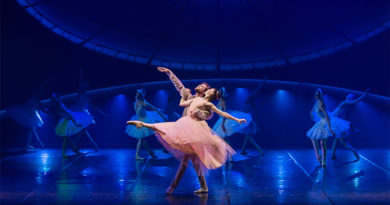 Plenty of options in midtown for young ballet fans