Danny and Grace Calia hope to get a good night’s rest tonight at their home on 247 Strathmore Boulevard where they’ve lived for 51 years.

At a community meeting last night, the TTC agreed to pursue an alternative location for a new second exit for Greenwood station that wouldn’t involve expropriating their property and the one next door at 245 Strathmore.

“We’ve been here 50 years. I raised kids here, grandkids here,” said Danny Calia from his home this afternoon. “I hope they come up with a good idea to make us happy. The mind is relaxed now.”

His wife Grace added, “For now, I hope (the alternative) goes through. We can rest easy.”

At a commission meeting being held tomorrow, the TTC will present a new option brought to them by area residents.

It involves buying a vacant house at 9 Linsmore Crescent directly across the street from Greenwood subway’s current entrance.

This home has been boarded up for four to five years and vacant for about four years prior to that, explains the Calias’ daughter Bruna Amabile.

“That’s now (TTC’s) preferred option. They have to do deeper analysis to see if it works for the TTC,” Amabile said.

“The applause (last night) in the room was unbelievable. But we aren’t out of the woods yet.”

The TTC plans to present the Linsmore option as its first choice. Expropriation of 245 and 247 Strathmore remains the back-up plan.

“For Greenwood (station) we will seek approval for option from the community that doesn’t involve expropriation of a home. No one lives there (9 Linsmore), it’s a house not a home,” he said today in an interview.

If the TTC does have to revert back to the Strathmore expropriation option, it won’t proceed without further community consultation, he promised.

The TTC is also voting tomorrow on options for the equally contentious second exit for Donlands station.

In that case, the transit commission proposed acquiring 1 and 3 Strathmore for demolition, plus partial expropriation of several other homes on the block.

Now, the TTC’s now looking at a new option to place a second Donlands subway exit directly on Dewhurst Boulevard, which would turn into a one-way street.

“”In the case of Donlands, the TTC will pursue a new municipal right of way on Dewhurst,” said Giambrone.

That would be the preferred option.

“In the case of Donlands (station), residents aren’t happy with either option (new or old),” said Strathmore resident Lisa Dymond.

The reason is both options maintain that the exits be built in the middle of a residential neighbourhood, still require partial expropriation of 11 to 13 homes, said Dymond.

“I don’t think the TTC has had enough time to do its homework,” she said. “Have they talked to the city about impacts on traffic, emergency vehicles and service delivery (with new option)?”

The TTC votes on the proposals at a meeting tomorrow afternoon. 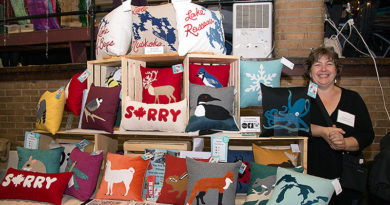