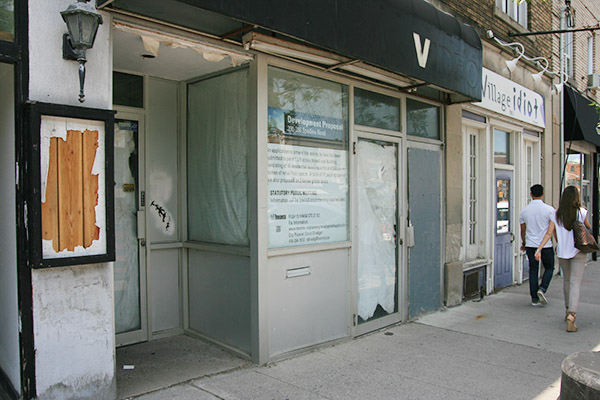 Forest Hill Village residents can expect the chance to articulate their opinion of a nine-storey, 35.5-metre mixed-use building proposed for 390–398 Spadina Rd. at a community consultation meeting this fall.

The application, which Walker Nott Dragicevic Associates submitted on behalf of developer Armel Corporation in April, exceeds the four-storey, 12-metre height limit permitted by the recently approved Forest Hill Village Design Guidelines and was opposed by city staff in a report published in May.

“It is too intense a development for this site,” Ward 21 Councillor Joe Mihevc said. “It isn’t very often that planning staff indicate in the preliminary report that the developer is asking for too much, so this is clearly a signal that they need to come back with something more modest.”

The site, which once held a video store and the former Village Idiot pub, lies at the southwestern edge of what the new design guidelines designate as “character zone A,” a mix of commercial and mixed-use developments that forms the heart of Forest Hill Village.

However, Mihevc said it’s likely that in submitting the proposal, the developers were comparing the site to some of the neighbouring apartment buildings, such as the six-storey rental and condominium apartment buildings at 55 and 60 Montclair Ave.

According to the May staff report, the proposal not only exceeds the neighbourhood’s height limit, but its density and setback limits as well. Moreover, the report says the proposal “does not fit harmoniously” into Forest Hill Village.”

“It will be interesting to see whether the developers hold firm, or whether they accommodate the input of planning staff, myself and the local community,” Mihevc said, noting that he expects a community consultation meeting to take place in the fall.

Armel Corporation did not respond to requests for comment.

Forest Hill Village BIA Coordinator Yvonne Bambrick said the board has not yet have an opportunity to review the proposal.