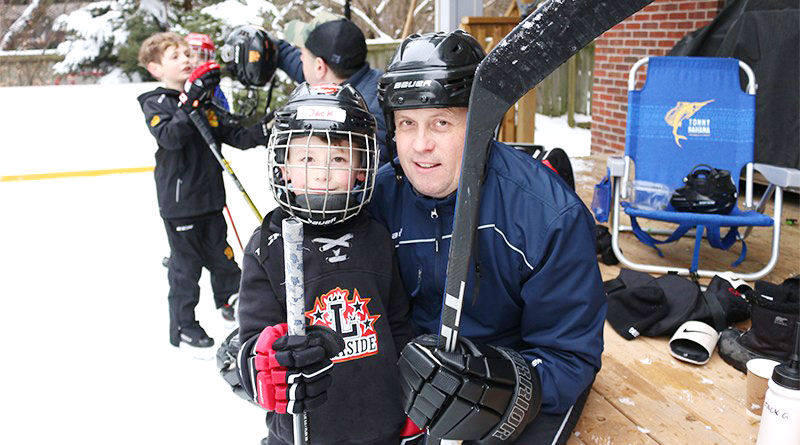 Walk up to the North Leaside home of Sven Walker, and you’ll hear the sounds of ice spray, hockey sticks and the clink of a puck hitting the goal post.

Kids carry the puck down the surface that’s about 70 feet deep and 30 feet wide. Dads join them manning the nets as temporary shinny goalies.

Walker has always had a backyard rink, but due to inconsistent weather, brought on by climate change, he’s had to find other means to maintain the icepad. That’s why the lawyer purchased a cooling system from an Oakville parent in November.

“He was looking for a new owner,” he said, while seated on his deck, two pet bunnies hopping a cage behind. “It’s not something that you would typically buy, but it was the perfect size for my backyard.”

“We’ve had so many days with above temperatures,” Walker lamented. “But it’s a portable ice rink that you can roll up in the spring, and you just set it up in the winter.”

Every Wednesday and Thursday night, he hosts a men’s shinny league from 8 to 10 p.m. Kids can swing by Sundays.

“We have people from all over the neighbourhood,” Walker said. “I don’t think the city maintains its rinks as well as I do.”

Andrew Garlock, who was at the North Leaside home with his 7-year-old son Jack, grew up in the area and played hockey for the Leaside Flames. Jack plays for the minor novice team.

“It’s awesome. This what it’s like,” the elder Garlock said, while his son added that he enjoyed playing outside more than in the hockey rink.

Melissa Bobbie and her daughter Taylor were also on hand to partake in a pickup game or two.

When the sheen of the ice is covered in too much snow dust, out come the shovels to pick up the excess, and then a tool called a rink rake is hooked up to a hose and dragged over the surface.

“Leaside is a big hockey community, lots of parents and kids involved, and ice time seems to be at a premium,” Walker said.