Score another point for the environment: one of its allies is now better funded and better plugged-in.

“My parents are still excited and my grandparents keep calling to congratulate me,” said Bogdanova.

The award is worth up to $75,000 over four years, for use at any of the organization’s 24 partner universities. But it’s about much more than the money the grade 12 student said.

“It’s also the community and the connections I’ve made and all the people at the foundation are really great,” she said.

The foundation that grants the Loran award will be hand-in-hand with Bogdanova as she embarks on and eventually completes her undergraduate study. They will mentor her, offer summer enrichment programs and act as a general web of support and inspiration.

“It’s really great that I have this network available to me,” said Bogdanova.

But the road to such a gleaming future was hard-won, as it often is.

First she had to lead a life of incredible achievement throughout her high school career, a career that has included executive
directorship of an environmental organization called Switch, which promotes sustainable energy. With her help, the group was able to install a solar panel array at her school and has since been spreading the message to other schools across the GTA.

After four years of thoroughly wowing her teachers and administrators at Mackenzie, the school nominated her for the award.

She wrote a series of essays stating her case and was invited to join 60 of her peers at a regional interview session, emerging among the nine chosen to move on to the national level.

The weekend of Feb. 11 and 12, she joined 73 of the nation’s best and brightest to vie for the 30 available awards by impressing roomfuls of people in a series of further interviews.

“It was a really rigorous interview process, my granddad was joking that it’s kind of like the Nobel Prize committee,” she said, adding that it was amazing to be in the company of and competing against people of that quality.

On the Sunday after the last interviews, her telephone rang. She’d won.

Now the fun begins: what do you do when the world is your oyster?

“I’d like to explore options that might not have been available to me before,” said Bogdanova, indicating that studying English Literature at McGill is very much a possibility.

“I get to live on residence which is kind of a big deal because that would have been really expensive,” she said. “Otherwise I would have had to rely on loans and stay at home.”

With the help of the foundation and a good amount of hard work, Bogdanova hopes to continue her environmental work by becoming an environmental lawyer.

“I’m really interested in public policy and the environmental aspect of it. I want to see if I can get into that — to impact the country kind of from that legal standpoint,” she said.

Fresh on the heels of the nation’s biggest scholarly vote of confidence, it seems Bogdanova is off to a good start. 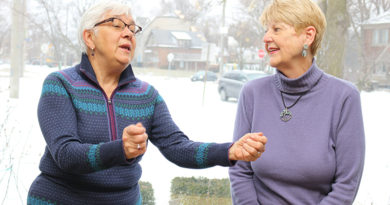