Heritage Toronto has stepped in to prevent the demolition of a former rep theatre near Bloor and Dufferin.

In January, the owners of the Paradise, a tiny, vacant theatre at 1006 Bloor St. W. stated their intention to demolish the building. But in early March, city council gave parts of the property official heritage recognition.

“It’s designated under the Ontario Heritage Act,” said Gary Miedema, chief historian and associate director with Heritage Toronto. “What it means is there are limitations now as to what any owner can do with the building. There are key aspects of the building that need to be preserved.”

According to Miedema, the theatre was awarded designation for three reasons. The first was to preserve the original art deco façade that greets visitors at the main entrance of the building.

The second was that it was designed by Benjamin Brown, one of the earliest practicing Jewish architects in Toronto. Brown designed several other buildings in Toronto including the Standard Theatre on Spadina Avenue.

“The third reason is its character on the street,” Miedema said. “It’s an important building on that stretch of Bloor Street that helps to define the streetscape.”

The theatre, which first opened in 1937, closed its doors in 2006 with the fall of the Festival Cinemas chain. Unlike many other old theatres in the neighbourhood, the Paradise Theatre kept its original name except for a brief period in the 1980s when it operated as an adult movie theatre known as Eve’s Paradise.

In its heyday, Paradise was surrounded by several other theatres, including the Metro, the Midtown, and the Bloor Theatre. Freelance journalist Eric Veillette, who runs a theatre history website called silenttoronto.com, said Paradise was not one of the premier theatres of its time.

“It was always sort of the poorest performing theatre in the rep cinema chain,” he said. “It kind of went along with the motions of a lot of the other Bloor Street theatres.

“It was kind of the little guy trying to catch up with everybody.”

Still, it managed to stay open for nearly 70 years. However, changes in the habits of film enthusiasts hurt the single-screen theatre’s business.

“The economic realities of movie-going and exhibition are just so different now then they were back in the 30s,” Veilette said. “People simply can’t afford to keep operating single-screen cinemas the way that they used to.”

Veilette said that a grassroots movement attempted to reopen the theatre a few years back but had little success. If the building were to reopen, Miedema said the new business would not have to be a theatre so long as the marquee and the art deco façade are preserved.

Such a change would not be unprecedented. The Runnymede Theatre in Bloor West Village reopened as a bookstore in 1999 and the Allenby Theatre on the Danforth is now occupied by a Tim Hortons and convenience store. Several former Toronto movie houses are now event spaces.

Theatre-buff Veillette said he would be open to a similar business model being adopted at the Paradise Theatre site. 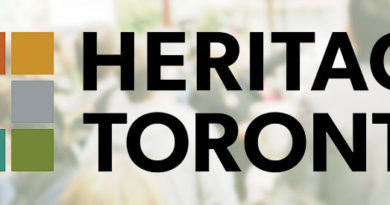