Now that the votes from the federal election have been counted in Don Valley West, it’s time for the victor, Liberal MP-elect Rob Oliphant, to get to work on his priorities.

On his return to Ottawa, Oliphant expressed two key priorities. During his canvassing in the north part of his riding, he found infrastructure spending and “Toronto’s fair share” were the issues most often mentioned, while in the south, especially in Thorncliffe Park, immigration ranked very high.

As for a third issue, airplane noise, Oliphant will have to roll up his sleeves to find out how he can be of help.

“I’m going to have to do a lot more studying on that to understand the legislative framework on which airplane noise is working,” he said the Friday after the election. “That is something I am going to look at.”

As for receiving any possible portfolios in Trudeau’s cabinet — for which he’s been touted as a contender — Oliphant was coy and said he would be thrilled doing anything.

“We always say we’re happy with anything we’re asked to do. I have no inclination that I will be in the cabinet,” he said. “Nothing has been said to be. I will wait and see, but I know whatever I’m doing there it will be fun and interesting.”

As for the reaction from communities in his riding, all was quiet.

The Leaside Property Owners’ Association was reticent to comment, as co-president Carol Burtin Fripp said they do not endorse any party or candidates and were hard at work on city hall related issues.

However, Fripp offered an observation on the promise of more funding to infrastructure in Toronto from the Liberals.

“I think it’s fair to say that we have been encouraged by the prominence of urban issues in this campaign, and look forward to infrastructure funding which will address the city’s urgent needs, and they are urgent,” she said in an email.

Oliphant received 27,410 votes, compared to incumbent and Conservative candidate John Carmichael who had 19,206. The New Democratic Party’s Syeda Riaz grabbed 3,076 votes and the Green Party’s Natalie Hunt picked up 848. Voter turnout for the riding was 72.45 percent.

“I am really excited that the voter turnout in Don Valley West was five points above the national average,” Oliphant said.

Though most of the Conservative vote stayed the same in the new, redistributed riding, Oliphant noted the Green vote and New Democratic Party vote declined, while the Liberals increased dramatically.

When asked if it was the anti-Harper vote that caused the results, Oliphant expressed some agreement, but attributed it mainly to the message the Liberal party ran on.

Since the riding’s creation in 1979, it has alternated between blue and red. It also has one of the highest Muslim populations in Canada.

It was an issue raised by Oliphant in his victory speech, and afterwards to reporters.

Sobeys expands at Laird and Wicksteed 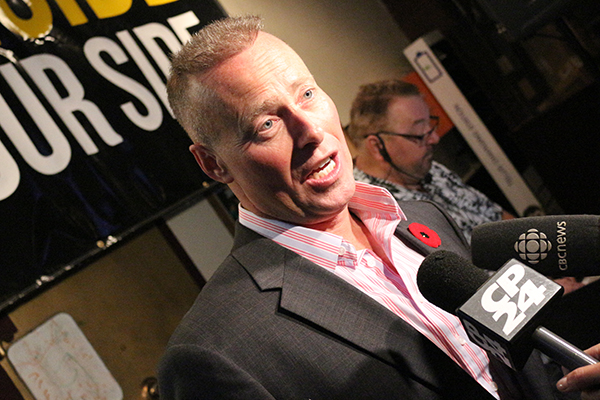