Two weeks after it was presented with much fanfare, an ambitious transit proposal that included 170 kilometres of rail, subway track and bus routes amounted to nothing more than a lot of talk at a July meeting of council.

Most of the original proposal unveiled by TTC chair Karen Stintz and vice-chair Glenn de Baeremaeker on June 27 didn’t make it near the floor of council after it received a cool reception from many councillors and Queen’s Park. Days before the council meeting, Stintz backed down from requesting a formal staff review of OneCity, as was originally intended.

Left out of the conversation completely were OneCity proposals for light rail and bus routes in North York, Etobicoke, Scarborough and the waterfront, as well as a subway along Don Mills Road and an Eglinton Crosstown extension to that would take it to Pearson airport, among others.

Instead, councillors spent the better part of five hours debating a motion from Peter Milczyn that asked staff to report back on a transit expansion plan, including funding models, in the fall.

It passed with a near-unanimous vote.

Speaking with reporters afterward, Stintz refuted suggestions it was a bid to save face after the OneCity plan failed to garner support. She insisted the vote clarified and strengthened council’s intentions on a city transit expansion plan.

“This will actually prioritize lines, link them to the Official Plan, bring together a funding strategy, and we’ve identified our first priority project,” she said, referring to council’s endorsement of the East Bayfront light rail line.

Councillors paid no attention to the only major tenet of the OneCity proposal to make it near the floor of council: converting the Scarborough RT to a subway line travelling from Kennedy Station to Sheppard Avenue and McCowan Road.

After months ago voting to convert the RT to light rail, councillors at this July meeting voted against reopening discussion on the matter.

“I’m very disappointed that didn’t happen. We think there’s merit, there’s ridership demand there,” said de Baeremaeker, who presented the motion. “Our council colleagues were just not prepared to accept that today.”

It’s not the only thing some councillors weren’t willing to accept. North York councillor David Shiner characterized OneCity as a tax grab with no priority vision.

“This was a case of, if you put everything into the cake — chocolate chips, strawberries, raspberries, blueberries and you ice it — maybe someone will want to buy it, but at the end of the day, it didn’t work.”

Milczyn also dismissed OneCity as simply a conversation, telling reporters his motion established a more robust stance on transit, one that will link expansion plans to the Official Plan and provide opportunity for public feedback in the fall.

“We’re going to have public consultation, which we’ve never had in this city … about what the residents want in terms of where the lines should go, what kind of mode they should be and how they’ll pay for it.”

A sweeping plan, the OneCity proposal placed new transit in almost every corner of the city, with elements that harkened back to the now-defunct Transit City plan. OneCity pitched light rail for Jane Street and Finch West starting at Yonge, and a Don Mills Express subway that would act as a downtown relief line — considered a major priority to relieve pressure off of the Yonge-University-Spadina line.

OneCity proposed a funding strategy that would have seen the city footing one-third of the bill through new property tax increases, with two-thirds pitched by provincial and federal governments. The project would be built over the course of 30 years at a price tag of $30 billion.

De Baeremaeker said OneCity will appear in some form in future transit plans.

“We don’t care whose name is on it in the end, we don’t care what people call it,’ he said. “The fact is, if we get a transit plan supported by council it’ll be a first ever.” 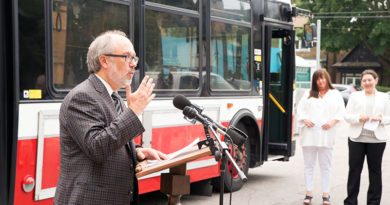