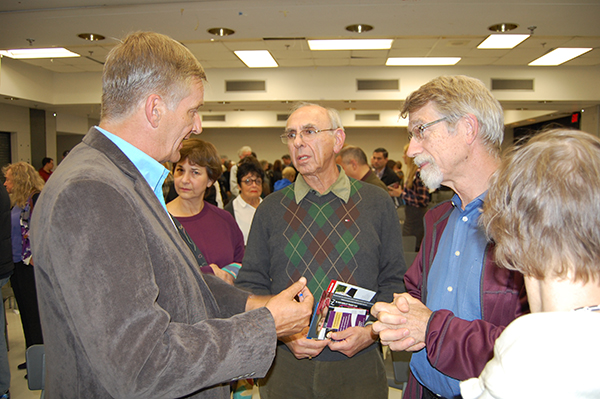 More than 150 people packed a meeting room on the main floor of the North Toronto Memorial Community Centre on Monday night for what turned out to be less of a debate and more of a series of speeches from candidates vying to be the next Ward 16 city councillor.

Candidates were given a minute and a half each to introduce themselves, followed by three minutes each to answer a set of three questions — focusing on development, transit and the city budget — that had been emailed to them prior to the event. Afterward, residents were encouraged to mingle with the candidates.

The debate was held by the Avenue Road Eglinton Community Association. Thirteen of the 16 candidates participated.

Many people were seen leafing through the brochures and pamphlets of each candidate as they spoke. Most told the Town Crier they were finding it difficult to choose who to vote for, because of the large number of candidates on the ballot.

Of 44 wards looking to fill a council seat in the Oct. 27 municipal election, Ward 16 has the second-most number of candidates registered. Ward 20, Trinity-Spadina, has 22.