The last time you stepped into your car, you probably didn’t realize the material that helps get your vehicle rolling is an environmentally friendly substance.

No, it’s not gasoline or diesel. Unfortunately, the fuel in your car still generates carbon emissions.

Rather, it’s the rubber in your tires the Ontario Tire Stewardship is trying to promote as a sustainable, green material suitable for a wide variety of uses.

And first place pair Gloria Perez and Jessica Gafic didn’t have to reinvent the wheel to win the contest. They simply had to create a sustainable and practical project at the Evergreen Brickworks — using recycled wheels.

“For us, we really wanted to focus on incorporating the tires into the design,” explained Gafic. “We were supposed to use tire products for 30 percent of the materials, but we ended up using 50 percent.”

The project, which will now get a chance to come to life at the Evergreen Brickworks, paid for by Ontario Tire Stewardship, is unofficially titled “At the Riverbank.”

The two Humber College interior design students both live near the Brickworks, and decided on the concept to highlight the significance of the Don River both to the city and the park.

“We were fascinated by the idea that the Brickworks is situated just near the Don River and its importance to the city,” Perez said. “We took that idea and used it as our concept for the riverbank.”

The ultimate design reveals a trail that trickles in and around the various attractions at the Brickworks.

“We pretty much designed a path that is in a bit of an abstract form, more of the organic movement of the river,” Perez said. “Along that path is a pathway into the pavilions and into the different areas of the site.”

The path is also sprinkled with pods that resemble rocks, which serve the function of seating and a play area.

Much of the path is composed of recycled tire rubber, including the tops of the pods, much of the floor material, and even some of the mulch.

The Ontario Tire Stewardship’s executive director, Andrew Horsman, said the pair’s consideration of how they would integrate the path into the Brickwork’s landscape was a major factor in them being selected as first place winners.

“It was a design that really took into account how that space was used,” he said. “That sort of holistic approach, looking at all of the important uses for that space, was one of the things that really stood out.”

For example, the pathway considers access for vehicles to the farmer’s market, clear walkways for food traffic, as well as elements of playfulness for children and vibrant colours.

“I think they were looking for an innovative idea on how to use these tire products,” Gafic said when asked to speculate as to why they won. “Because we were able to incorporate them both into the architectural forms, and the pathway and into the landscaping, we were really able to showcase these products.”

And that’s part of the challenge’s ultimate aim.

“Our mandate is really to focus on ensuring that all of Ontario’s tires go to high-value recycling applications,” Horsman said. “And there are a number of interesting applications for that material, but people generally just don’t know about it.”

In addition to providing sustainable material for pathways in city parks, tire rubber is also heavily utilized in hockey skates and gym flooring.

Horsman was thrilled the challenge simultaneously created some buzz around tire-derived products while at the same time breathing new life into the Brickworks.

“It’s an exceptional place to be showcasing that kind of product,” he said. “And it’s a great audience to reach: you’ve got urbanites from Toronto buying locally grown produce, and at the same time they’re seeing locally manufactured products from a recycled material.”

For the pair, the prospect of their design going from concept to reality was equally as daunting as overhead challenges.

“It was our first competition having to meet a budget and certain deadlines,” Perez said. “And the reality that we could potentially have this thing built.”

The challenge was launched in mid-September 2011 and was open to Ontario post-secondary students studying landscape architecture and related subjects. Submissions closed on Nov. 21 and the winners were announced at a gala on Jan. 19.

Horsman said while they were pleased with the challenge’s results, the stewardship would announce the challenge a little earlier next year. For Gafic and Perez, the best part of the challenge is when their design will be unveiled, slated for spring or summer 2012.

“It was something both of us really wanted, to have our own little stamp on the city,” Perez said. “And fortunately now we will.”

Designer maps out city of neighbourhoods 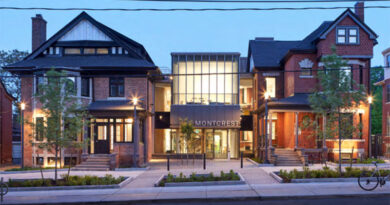 Are these our best new buildings?