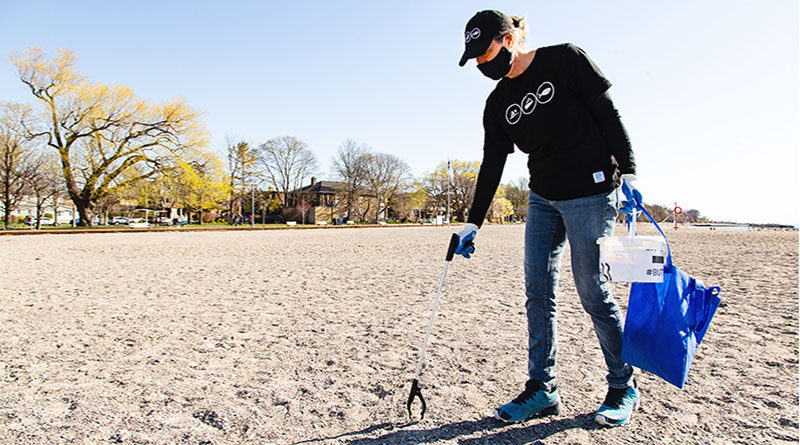 Beach resident Jane Anderson has had her fill of cigarette butts.

In her free time she combs the green spaces and beaches from Ashbridges Bay to Balmy Beach collecting the tiny stubs, then puts them in a bag for proper disposal.

She’s an avid lake user and seeing these butts burns her up.

“That’s one thing that’s really bothering me. I can honestly collect five or 600 cigarette butts in an hour,” Anderson says.

For the month of April she and colleagues in the Toronto Lakefront Community have been cleaning up litter along the Eastern beaches and in parks. Anderson co-founded TLC along with another resident last November. The group’s members like to be known as citizen stewards of the lakefront.

TLC’s initiatives include eliminating unsolicited graffiti, finding a solution to the road salt entering the lake through storm sewers, easier accessibility to the beach for people with mobility problems and finding a name for the commonly known “Secret Beach” east of the R.C. Harris Treatment Plan.

“I think everybody is really concerned about cigarette butts,” Anderson fumes. “People don’t realize they’re litter. They’re small and it’s socially acceptable, almost, just to put them on the ground.”

She gives a shout out to A Greener Future which does an annual Butt Blitz and to local resident Dora Attard who’s distributed sand-filled galvanized buckets near benches for smokers to toss their butts into. Attard also runs Plastic-Free Beach Toronto on Facebook.

About the buckets, Anderson says, “that’s a start. It’s a great idea, but I think we need something a bit more.”

Public use of the lakeside went up exponentially last summer, when bars and restaurants closed for COVID, Anderson noticed. She, herself, swims and kayaks along the waterfront and has just started to become a cold-water swimmer in winter.

Anderson doesn’t just toss the butts she finds into garbage bins. She gives them to A Greener Future, which passes them on to Terra Cycle, a national recycler that safely disposes of the filters, the plastic tips on cigarillos, the tin foil that cigarettes are wrapped in and the plastic wrapping that goes around the box.

Anderson points out filters are made of micro plastics and don’t break down.

“Being so close to the lake, that’s really a problem,” she says.

The goal of Butt Blitz is to collect one million butts across Canada. In April the campaign collected 400,000, Anderson says. She herself picked up 3,000 as of mid-April.

Other stuff also gets on Anderson’s nerves: discarded water bottles, pieces of foam, beer cans, Tim Hortons cups and fast food packaging. It all goes into her bag for either general garbage or recycling. It’s not left to be a beach eyesore or a potential pollutant.

Volunteering with Swim Drink Fish Canada, located on Bay Street, piqued Anderson’s concern for the lake and its water quality. SDF Canada founder and president Mark Mattson and his trained volunteers check for E. coli bacteria in Lake Ontario, especially along the harbourfront.

“There seemed to be a lack of clarity around doing public health tests for recreational water,” Mattson, an environmental lawyer, told Streeter. “So, we started to develop those protocols with our team at Lake Ontario Waterkeeper and Swim Drink Fish.”

They worked with professionals to develop those protocols.

Swim Drink Fish publishes Swim Guide in 11 countries to let recreationists know where it’s safe to swim, drink the water and fish. SDF is working with teams on algorithms and artificial intelligence to try to get water quality results quicker than the 24 hours it currently takes at its Bay Street lab and then let the public know the results instantly.

Volunteers, from early June to late September, head to the waterfront with little bottles, scoop up water samples, seal the bottles, make notes, put them in a cooler then head back to the lab to get the samples analyzed. Mattson calls his volunteers “citizen scientists.”

Generally speaking, the Eastern Beaches are in good standing when it comes to water quality, although the number of swim days at Balmy Beach in 2020 noticeably decreased.

Much of Toronto’s sewage system is old, built in the days when huge stormwater pipes and those for sewage were split in half. They’re known as a Combined Sewer System (CSOs). After a downpour stormwater overflows into the sewage pipes and flushes toilet effluent straight into the lake, which also happens to be Toronto’s source of drinking water.

The city’s plans to replace all CSOs in 25 years, according to Mattson. But, as he notes, “it takes money.” Nevertheless, Swim Drink Fish is pushing to have the pipes restored a lot quicker.

Other initiatives for Anderson’s Toronto Lakefront Community include:

On April 7 city council adopted a motion from Toronto-Danforth Councillor Paula Fletcher asking the city manager to see what can be done about the city’s excessive salt use.

“There have been recent observations made by residents in my Ward who are part of the sidewalk snowclearing pilot about the volume of salt being used on our sidewalks after winter weather events and snowfalls,” Fletcher said in her motion.

Summing up the beaches’ importance Anderson says it’s an important gathering place not just for Beach residents but for people across the city. “It’s a wide-open space where the community can safely come together or they can be alone if they want to,” says Anderson says.

“It’s very therapeutic being by the lake.”

BIA asks shoppers to butt out 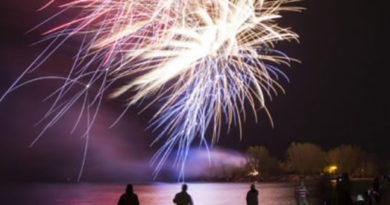