Police investigating the daylight murder of a 24-year-old man in Lawrence Heights have released footage of what they believe is a witness and suspected shooter.

They released the video in the hopes of garnering more information on the incident.

On Aug. 24, Randy Anthony Malcolm, 24, was shot on Cather Cres., a residential street of rowhouses that runs off Varna Drive.

Malcolm, who police say was familiar to the area but did not live there, was taken to hospital where he died the next day.

“He was shot from so far away, literally 40 or 50 metres,” Neal said, adding that Malcolm was one of likely four people in front of the residence at the time. “I think (Malcolm) may have been sitting down at the time, I think he may have been on the patio when (the shooting) actually happened.”

Investigators say an unidentified suspect fled the scene on foot before entering a getaway car.

Neal said the shooter likely entered the complex of houses through Trafford Lane and then faced Malcolm from a southerly direction. He said he believes the shooter and the person driving the getaway car knew the area.

“Once you’re in the parking area, you’re trapped unless you come out (the same way you came in),” Neal said.

Police are still unsure if Malcolm was the intended target, but Neal said police have been getting increased help since releasing just under a minute of security camera footage that shows two people running from the scene. Police believe the first person seen in the footage is a witness, while the second is the suspect. Neal said every little bit of information helps.

“Not just in terms of who the shooter might be, but the witness, who I don’t want to put on the spot, I’d rather him call in.

“And we’d love some more details on the vehicle that might have been involved,” he said, urging residents to come forward, even anonymously through Crime Stoppers. “We need their help, but all I can do is ask.”

Meanwhile, the shooting has frightened some residents into taking some drastic measures.

A woman who didn’t give her name said she had already moved since the shooting.

Another area resident, Lisa Da Silva, who just moved into the neighbourhood in June, said the shooting gave her a real scare.

“I wasn’t here at the time of the shooting, because I was at school when it happened,” she said. “(At first) I was actually scared to go out.” 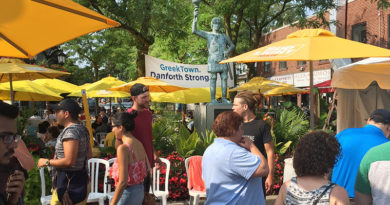