Hydro One and Toronto Hydro are proposing a revamp of the electrical corridor that runs through Leaside in a bid to replace the dated infrastructure and increase the electrical capacity of the lines.

However, some members of the community worry the project may create an unsightly obstruction.

The Midtown Project, which is still in the preliminary stages, involves rebuilding the hydro towers between the Leaside Transformer Station and Bayview Avenue, boring a tunnel for underground cables between Bayview and Birch Avenue, and refurbishing the circuits between Birch and Bridgman Avenue. New electrical equipment will also be installed along the junctions.

The project is coming under fire by members of the Leaside Property Owners Association opposed to the decision to raise the hydro towers from 29 to 40 metres.

“They’re not that visible right now,” says LPOA director Robert Champion. “They want to add a third circuit, so they have to build the towers higher than before.”

The addition of a third circuit means the towers must have a second tier to carry the additional wires. Opponents say the added height of the towers will have a negative effect on the character of the neighbourhood.

“It will be very visible,” says Champion.

Champion says the LPOA asked Hydro One and Toronto Hydro to bury the new wires underground, but the companies balked when it became apparent it would warrant complex negotiations with CP Rail, Loblaw, and the municipal government.

Local councillor John Parker says the addition of a third circuit is actually good news for the neighbourhood because it will help limit the radiation of electromagnetic fields generated by the electricity.

“If you put a current in a wire, it creates an electromagnetic field,” says Parker. “If you put it in three lines in close proximity, the field is dampened by the other wires.”

Parker says the extra height will be irrelevant, as the new installation will be carried on slender poles, and be less of an obstruction than the current towers.

“It is not as though someone would look out their window and see a massive installation going up,” Parker says. “The poles will be less prominent than the installations in the past.”

Parker says residents should be happy for the update in infrastructure because it secures the supply of electricity in an area with increasing demand.

“The current system is getting old and we are running the risk of power outages. It is good the utility (companies) are taking an interest in it before anything happens.”

Hydro intends to release an environmental study this year.

The Leaside Property Owners Association planned to hold a public meeting at Trace Manes Park Community Centre on Jan. 6 at 7:30 p.m. to discuss options on the issue. 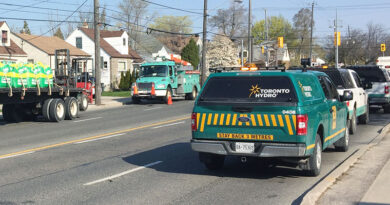