If you live in south Leaside, you know one of the highlights of the Halloween season is seeing what John Bech-Hansen has been up to this year.

Each year he sets out before his Rumsey Road house intricately carved pumpkins depicting people in the news. This Halloween it was Donald Trump and Hillary Clinton getting the treatment.

He’s been doing it annually for 20 years now.

“Since my kids were born — that’s when I started creating more elaborate pumpkins,” he says. “Before I had kids, I carved the usual pumpkins with the triangle eyes.”

The 57-year-old started experimenting with patterns found on the Internet but after awhile his skills surpassed those designs and he had to come up with his own.

Each year he takes a poll of his wife, two daughters and friends to come up with subjects. Then he looks at hundreds of online pictures of the suggested personalities to select those that would work as carvings. Once he has an appropriate picture he uses digital techniques to turn it into a high-contrast image to use as a model for his knifework.

As might be expected, when he’s carving he leaves intact the parts he wants to be black in the final work and cuts away the bits where the light is to come through brightly. A further trick though is to peel away just the skin for the in-between areas he wants to be “grey-toned.”

Last year he did Justin Trudeau and in previous years his political subjects have included Barack Obama, Mitt Romney and both Rob and Doug Ford.

But he’s also done entertainment figures in the news, such as Michael Jackson after the musician’s untimely death.

It’s a far cry from Bech-Hansen’s usual work, except perhaps in the designing aspect. He’s a general contractor, running his company Home Reborn, which has done a lot of work in Leaside.

Does his choice of subjects for carving up imply any political views of his own?

“Absolutely not!” he says. “Though I could say my views about Donald Trump are the same as most Canadians’.” 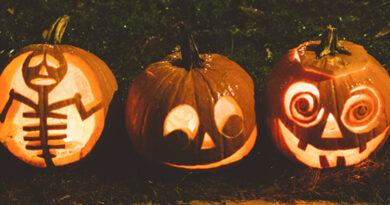 Nov. 1: Don’t throw your jack-o-lanterns out