As the past couple of months have shown, nothing brings Canadians closer together than hockey.

That goes double for Leaside.

Last year, a fundraising campaign was started to help raise money for a second ice pad at the constantly booked Leaside Gardens Arena. In addition to the fundraising efforts of the arena’s three main user groups, the Leaside Hockey Association, the Leaside Skating Club and Toronto Leaside Girls Hockey, several other members of the community have launched their own fundraising initiatives.

Local real estate broker Patrick Rocca organized a barbecue in the late spring with the help of area merchants.

“We had a jumping castle, face painting, it was more a family thing,” said Rocca. “The purpose was to raise some funds.

For Rocca, the event served to help raise awareness of the expansion project and its financial needs. He knows as well as anyone how badly the community wants a new rink. Rocca’s son played hockey at Leaside but has since joined another league.

“When he did play for Leaside I don’t think he played a home game in Leaside,” he said. “So there’s need for that second ice pad.”

This summer, the Fox and Fiddle at 190 Laird Dr. will be donating 10 percent of all proceeds toward the arena expansion. Owner and manager Param Ratna said his goal is to raise a minimum of $25,000 for the project.

Ratna, who also lends his hand in fundraisers for Bessborough Public School, local baseball teams and the Rotary Club, said that if anyone else wanted to use his restaurant to host a fundraiser for the Gardens, they are welcome to do so.

“I’ve been here seven years,” Ratna said. “All Leaside people look after me so I have to look after them. I’m so happy to do that.”

Area councillor John Parker said he is happy to see how involved the neighbourhood has become in this project but said he is not the least bit surprised.

“This isn’t the first time. Leaside has shown this kind of spirit for generations.”

Parker has even rolled up his sleeves and gotten involved in the fundraising efforts himself. On June 11, he hit the streets with about 40 volunteers to raise money and awareness for the project.

Through cash and cheques the group gathered nearly $10,000 on that day alone, according to Allan Williams of the project’s fundraising committee. That figure could potentially climb higher once the numbers from both online and paper donation forms handed out on that day are factored in to the calculation.

Chair of the expansion committee, Paul Mercer, said that a professional fundraising company had been hired as a consultant to help the project reach its goal of raising $2.5 million by the end of this summer.

So far, just over $1.9 million has been raised, but thanks to some creative strategies Mercer said the project is on schedule to hit its goal. Individuals and corporations are now able to purchase the naming rights to various areas of the Gardens.

“There are a number of different areas within the arena that we have highlighted and have put a price tag on it,” Mercer said.

As previously reported in the Town Crier, the naming rights to dressing room number 5 are sought after by the family of the late John Creighton, a local businessman and hockey fan. A fundraiser for that purpose was held at Originals Restaurant at 1660 Bayview Ave. and raised about $12,000 of the $25,000 needed to ensure that there will be a Creighton dressing room.

If it is built, the second ice pad at the Leaside Gardens arena will be the first new rink the city has built in 38 years. So far, Mercer said everything seems to be going according to plan. 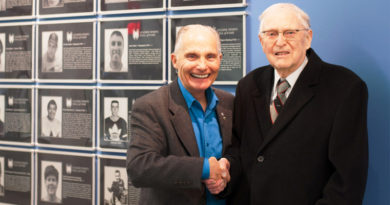