It’s no secret the Conservative Party desperately wants to gain a seat in Toronto and, according to at least one political pundit, York Centre may be the place they can pull it off.

“I was startled by how much (Dryden) dropped in 2008,” Martin said of Dryden’s nine percent decrease in votes between the 2006 and 2008 elections.

Martin says voters may think Dryden hasn’t been an effective MP, or international issues may be swaying them. Martin said Jewish voters, who figure prominently in York Centre, have been leaning more toward Conservative support recently, largely due to Prime Minister Stephen Harper’s supportive stance on Israel.

But Dryden dismisses any suggestion he’s in trouble at the ballot box this time around.

“It’s like any competition, whether it’s a business competition, sports competition or politics,” he said after a busy day of canvassing door-to-door. “If you ask any candidate anywhere in the country for any party, they think they can win and they approach it as if they can win.”

In 1997, the Liberals won the riding with Art Eggleton snatching a whopping 72 percent of the vote.

The then-Progressive Conservative party finished third, behind the NDP.

Fast forward 11 years to 2008, and Ken Dryden hung on for a Liberal win. But the Conservatives were nipping at his heels at 37 percent. It marked the first time since 1972 that the Liberals failed to gain a majority of the votes.

The Conservatives will try to capitalize on that, Martin said and build momentum in Toronto. Still, they have their work cut out for them, he said.

“I think a breakthrough for the federal Conservatives is one seat in Toronto,” he said. “A huge victory, major breakthrough, will be three.”

But Dryden is unmoved by the prospect of losing his seat. Rather, he looks forward to canvassing.

“Between campaigns … the opposition parties get called into play by the media only to react to what the government is doing,” he said.

Dryden’s opponent, Conservative candidate Mark Adler[/url], the founder of the Economic Club of Canada, grabbed headlines at the campaign’s onset by being first to put up lawn signs.

He says his campaign is doing what it can to get the message out.

“We’re just working very hard every day, trying to meet as many voters as possible,” he said after a long day of canvassing.

“(We’re) going door to door, listening and just trying to build toward winning the election here in York Centre.”

Next door to York Centre, in Willowdale, Liberal MP Martha Hall Findlay[/url] is facing her third election in three years.

She was first elected to the riding in a byelection in March 2008 to replace her 20-year veteran predecessor Jim Peterson. She had to do a quick turnaround to defend her seat in the fall 2008 federal election.

While she managed to keep the seat, she did drop from 59 percent to 48 percent of the vote in just seven months.

But those numbers are misleading, according to Hall Findlay.

“There’s no question that Liberals stayed home in very large numbers across the country,” she said of the 2008 election, citing a lack of interest in then-leader Stephan Dion and his green shift platform.

“It’s completely different now, the level of enthusiasm and the interest is terrific.”

Chungsen Leung[/url], the Conservative candidate looking to oust Hall Findlay, says he doesn’t think voters are concerned with what any local candidate has to say.

“It really is a national campaign — I don’t think I can, as a candidate, swing the votes one way or the other,” said Leung, an accountant by trade.

“May 2nd will be the deciding factor, at this point I can not gauge with a crystal ball and say it will go one way or the other.”

But Hall Findlay isn’t planning on going anywhere, except back to Ottawa, and she says it’s the approach her campaign is taking that will drive her success.

“We’re running a campaign as if we’re losing,” she said. “I think that’s the only safe way to run any campaign.”

York Centre is also being contended by Nick Brownlee[/url] for the NDP and Rosemary Frei of the Green Party. 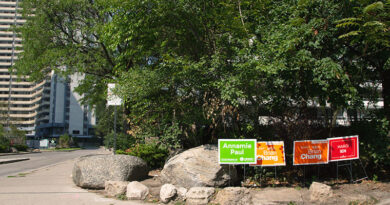