The Davisviller is the friend and backup singer of the late Rita MacNeil, who died in April, 2013.

He sits nestled in a leather chair in a Bayview Avenue cafe, breaking into the odd Celtic melody and sharing warm, often humourous anecdotes of his experiences on the road and at home with MacNeil, who was taken from the Canadian music scene so quickly.

One song he warbles, of her life in Cape Breton, is the one he wrote for her immediately after hearing of death, which arose from complications after abdominal surgery.

“It came right through because I didn’t know what else to do. You can’t write a card, you can’t send flowers — that’s not enough,” he admits. “She used to say to me, ‘You can write anything’.”

Ratchford has called the Balliol and Bayview area home for 29 years, and admits MacNeil would visit often, even cleaning up after him — ignoring his pleas to relax. At one point, the cherished folk singer, and advocate for women’s rights bought a home in Leaside.

“She came up here, and she was always of the notion that if she wore a hat and glasses, nobody would recognize her. That’s not true,” he says, with a throaty chuckle. “So many times she’d be on the street, and I’d get a call, ‘Come and get me darling, I’m in a spot I can’t get out of’.

“I’d come down here and there would be 15 people around her, and all she wanted to do was pick up a China set at a garage sale.”

Once people caught wind of her residing in the neighbourhood, MacNeil moved back to her home in Coxheath, N.S.

Cape Breton’s music scene has a legacy in Canada, as the Barra MacNeils, the Rankin Family and Ann Murray all know each other. Even Ratchford admits, his father’s side were MacNeils.

The song he sang earlier is part of an album he’s putting together to commemorate her passing. But he’s resolute about how he’ll release the album with half the money going to charities MacNeil supported, like women’s shelters and the Humane Society.

“That’s tricky, because you’re asking people, who worked with you, to work for free,” he admits, adding he’s currently shopping for musicians to help record. “When (the album’s release) will happen, I don’t know. I would like for it to come out at a time that’s suitable.”

For the time being, Ratchford fully he admits he’s still trying to find his way without her.

“She wrote a piece called, ‘Part of the Mystery’. Well, part of the mystery of my life now is to learn to live my life without her. I don’t know how,” he admits. “Forget the music. Forget the business. I miss my friend.”

The arts are more than electives to midtown schools 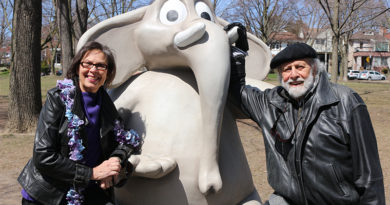 A celebration of flamenco

3 thoughts on “Ratchford shares his life with friend Rita MacNeil”