Sydney had just completed junior kindergarten at Maurice Cody Junior Public School when she was struck and killed by a car, right before the summer break.

“It was actually the day she had her stepping up in kindergarten,” Farrelly said. “In the morning she stepped up and in the afternoon the accident happened.”

Now, Sydney’s former school is renovating its playground in memory of the late kindergarten student.

“We’re adding a slide, climbers, bike track,” Farrelly said. “We’re expanding it so that it’s larger and then we’re naming it in honour of Sydney.”

Around the school, Sydney is remembered as an affectionate child with feet of fire.

“Sydney she was an amazing little girl; very, very outgoing, friendly and loved to dance,” Farrelly said. “She had one little friend in her class, they used to do dances for their teacher and for us in the hallway on a continual basis.”

Farrelly said Sydney could often be found dancing by the playground during recess. Her favourite colour was pink and she was especially fond of turtles, Farrelly recalled. Those aspects may be brought into the design of the new playground.

“Pink will be incorporated in the plaque that will be designed for her,” Farrelly said. “We are also looking at the possibility of adding a statue of a turtle as a climbing rock.”

The new playground will include an ornamental metal fence, shrubs, a new sandpit, a tricycle track and a new slide. Farrelly said the school would require $81,000 to install everything they’d like to have.

Additional play equipment and structures will also be included if enough money is raised.

It is not yet known when construction will begin on the project as Farrelly said the Toronto District School Board will not approve the project until all of the funds have been secured.

Sydney’s parents, Sara and Raj Sharma, have been actively involved in the playground project and various fundraising initiatives. Local businesses and other parents have also contributed either financially or by volunteering their time to the fundraising campaign.

“Many of the stores on Bayview and around our area knew Sydney and a group of our parents went store to store asking for their support,” Farrelly said.

So far, Indigo Books at 2300 Yonge St. donated 30 percent of all sales one Saturday morning and Fiori Salon and Spa on Bayview Avenue will donate 100 percent of their proceeds from a special Sunday, Nov. 13 opening to Sydney’s playground.

“There’s a strong sense of community at our school and this really sort of strengthened that even more,” Farrelly said. “Although it is as tragedy, it is something wonderful that is happening that many kids will benefit from.” 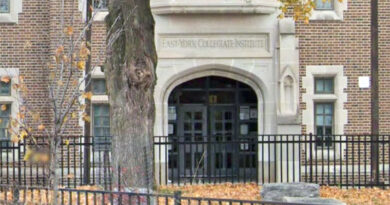 Rosedaler schools in the art of soccer