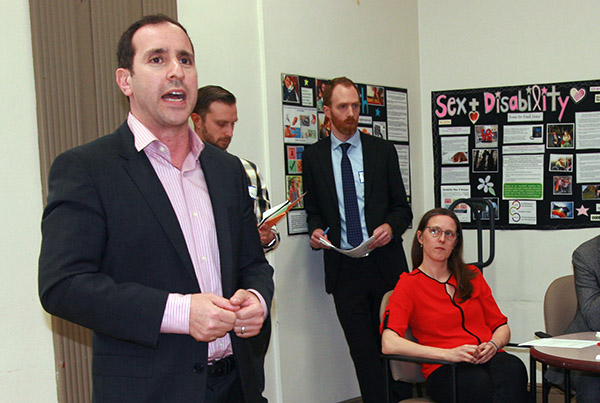 Since 2012, Ward 22 councillor Josh Matlow has spearheaded the development of Midtown in Focus, an ambitious plan to create official development guidelines for Yonge-Eglinton. The guidelines would accommodate the neighbourhood’s unprecedented growth without sacrificing the elements that made it such a popular destination in the first place.

But they have to be co-written by the community itself, Matlow told a Feb. 22 planning group meeting at the Anne Johnston Health Station.

“No one knows both the challenges faced by Yonge and Eglinton and the kinds of services and infrastructure they need more than the people who live and breathe it every day,” he said. “While we are still at the purview of an unelected and unaccountable OMB, we need to take as much power back into our own hands as possible to manage growth effectively.”

The dozens of community association members and development experts attending were asked a question that is straightforward, but difficult to answer in a way that all party’s can agree on: How do you define midtown’s character?

Residents were shown the detailed city staff’s detailed analysis of two of the Midtown in Focus plan’s “character areas” — the Redpath Park Street Loop, roughly bordered by Yonge Street, Erskine Avenue, Mount Pleasant Road, and Eglinton Avenue East; and the Eglinton Green Line, representing the stretch of Eglinton Avenue between Bayview Avenue and Avenue Road — and were asked how well staff’s suggested standards matched what they wanted to see.

“It’s about taking the public realm elements the community wants to see and identifying how we can translate that into a better sculpted built form,” Ann-Marie Nasr, Toronto’s manager of strategic initiatives, told Streeter.

For example, she said, residents made it clear that they would like a wider sidewalk leading into Redpath Park. For the Green Line residents wanted standards to reduce shadows on the street and require developers to increase setbacks, particularly on the east side of Eglinton.

“We’re getting some early feedback to our process, and that will help us develop a community meeting that will answer as many questions as possible, including the ones we didn’t think about,” Nasr said. “I’m thinking we’ll start to hear some common themes.”

Ward 25 councillor Jaye Robinson, who also attended the meeting, told Streeter she hears from residents complaining of overdevelopment on an hourly basis and was especially heartened to learn certain residents, outraged by the recent destruction of the 110-year-old Bank of Montreal building at 2439 Yonge St., were demanding the city incorporate heritage protection into its Midtown in Focus guidelines .

“It’s so important to hear what people who actually live in the neighbourhoods and communities that are too often subject to developers’ whims have to say about how we move forward,” Robinson said

Sherwood Park Residents’ Association President Ben Daube said he was pleased by the project’s progress thus far, praising Matlow, Robinson, and the city’s planning department for recognizing its current secondary plan was outdated and developing an update that he said “is going about twice as fast as it usually does.”

This is to be followed by a community meeting to discuss all 23 character areas, and invite all nearby residents to visit and comment.