Residents are fighting a developer’s plan to demolish a century-old house at 244 High Park Ave. and replace it with a pair of three-storey homes.

“Depending on your point of view, this development could be an opportunity to rejuvenate the neighbourhood or represent potential loss of our heritage,” wrote Martin Lennox, Junction Residents Association co-chair, in a letter on the association’s website.

“The large lots which drew many of us to the Junction are ideal for this type of intensification,” Lennox continued. “As the Junction gentrifies, prices will rise and the equation for profitable intensification will draw many more developers, with bulldozers not far behind.”

Last year Robert Salmena of Tera Firma Homes, purchased the stately home, which features bay windows and large rooms, and asked the city for permission to tear it down and subdivide the 15 metre lot into two lots of half the size.

On Feb 18, the committee of adjustment decided to delay hearing the matter until further consultation could be carried out with residents.

“It’s a 100-year plus home,” said Parkdale-High Park councilor, Bill Saundercook, who asked the committee for the delay. “It’s in very bad shape in the inside, but a good visionary could probably restore it and make it valuable.

“I said to the community I’d be very supportive of placing a heritage designation on the neighborhood. It’s something they would have to initiate, though.”

But Salmena, who owns a number of properties in the area, says that his company is sensitive to the concerns of area residents.

“We improve neighborhoods,” said Salmena. “We’re not out to destroy historical homes — that’s not our intention … This home is a dump.

“It has no historical designation or heritage listing and what we’re proposing complies with all city bylaws.”

Salmena met with residents to hear their concerns at a March 11 meeting.

“They want to see some room between the homes, so we narrowed the south house. That shows we want to work with the neighborhood. We’re not out to ram it down their throat,” Salmena said.

He was set to meet with residents again on March 24 to propose changes to the redevelopment in advance of the committee of adjustment hearing.

“The community got the applicant’s attention and I’m looking forward to our meeting next week, to hopefully see something that the community will be able to be supportive of,” said Saundercook. “Otherwise we’ll be roiling up our sleeves for a big fight.”

One man, many electronic styles 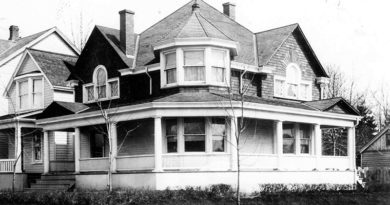