A city ombudsman report alleging he was mistreated by the Leaside Arena Board is “water under the bridge,” according to local
real estate broker Patrick Rocca.

“I’ve been a supporter of the arena for years, for more years than a lot of those people were even on the board, and I will continue to support it,” Rocca said in a recent interview. “That’s all there is to it.”

Ombudsman Fiona Crean’s report, Skating on Thin Ice: An Investigation into Governance at an Arena Board, alleges Rocca was not treated fairly when the board went looking for advertisers during the early stages of the fundraising process to build a second ice pad.

He had advertised on the Leaside Arena’s Zamboni for more than 10 years. He was paying $1,800 a year to advertise at the time the board emailed Rocca, on Dec. 23, 2011, advising him of a firm offer from grocery chain Longo’s, who would pay a total of $125,000 for the next 10 years, and wanting to know within one week whether he would match it, the report said.

Rocca was out of the country for the holidays at the time.

A few days later, Rocca offered to up his payments to $4,500 a year. The board rejected his offer, and later terminated his advertising contract.

Crean said the “firm offer” the board had conveyed to Rocca was never firm at all. At the time they contacted Rocca, Longo’s was still asking for an exclusivity clause in the contract, which would prevent any other grocer from advertising in the arena, but the board had previously decided against granting exclusivity as part of any advertising deal.

Months later, Longo’s made the deal for $125,000, without exclusivity.

Crean wrote that the board owed Rocca an apology and should write him a formal letter. The board did, and Rocca says he is grateful to have received it.

While Crean scolded the arena board, she also wrote that much of the problem was the city’s. Aside from having a local councillor and member of city staff on the board, there was little in the way of direction for what their roles were supposed to be, she said, in criticizing the city for not having a proper management oversight in place.

As a result, Crean made 18 recommendations in her report, 16 of which had to do with either governance of the arena board or communication between the board and the city.

Leaside Arena Board chair Ray White, who came to the post after the Rocca ordeal, said he accepts Crean’s findings.

“With respect to the recommendations in the report, we’re happy to comply and implement those changes the ombudsman has recommended,” he said.

“(The recommendations) are mostly administrative in nature I would suggest, and we’re looking at that as a way to better the operation of the Leaside Gardens board of management.”

White said that when it came to $125,000, there was a misunderstanding because some of it was meant to be a donation while the rest was for advertising. In her report, Crean called it “confusing,” because board notes had called it a donation, a sponsorship opportunity and an advertising contract, which she concluded overshadowed the fact that the board’s fundraising efforts were well intentioned.

Rocca continues to advertise in the new arena — along the boards now instead of on the Zamboni.

“I will continue to support the arena financially and personally,” he said. “I even skate a couple times a week there myself.” 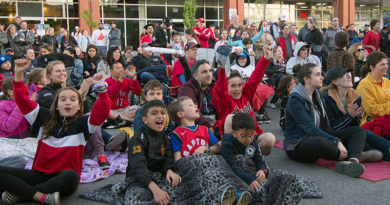 All quiet for Leaside businessmen and their extortionist