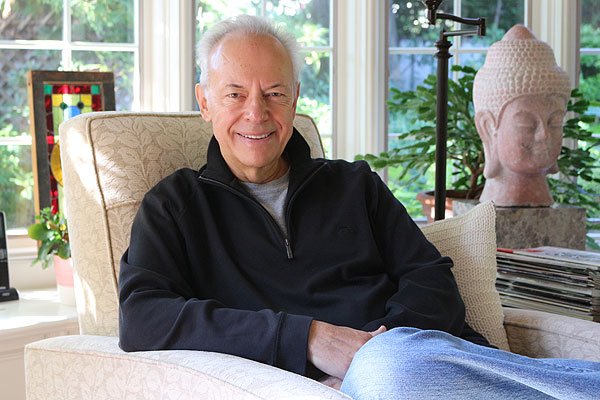 Ross Petty loves to hear the boos children and adults give him when he enters the stage during one of his productions at the Elgin Theatre.

The 68-year-old sits in the living room of his Cricket Club home, an original farmhouse built in 1857 that he shares with wife, ballet icon Karen Kain, and has a knowing smile affixed to his lips.

He plays the evil stepmother in Cinderella, which starts Nov. 21, and he gives a chuckle about his gender-bending ways.

“I’ve always played the villain in these pieces, whether male or female,” he says, a fiendish charm revealing itself in his eyes. “I guess I started doing the female version probably going back to Snow White.

“I don’t know, people seem to like me better as a woman than a man. I’m not quite sure why, but as long as they like it that’s fine by me.”

Ross Petty Productions, going strong since 1984 — 19 of those years at the Elgin — is known for its fractured fairy tales that entwine local Toronto and Canadian colour into the narration. This year, Danielle Wade, who played Dorothy in the Mirvish production of The Wizard of Oz, is taking up the role of Cinderella.

Petty says he’s always happy to be returning to acting, especially as the villain.

“It’s really delightful to know that as soon as I walk out on stage they’re going to boo me to the high heavens,” he says. “It talks to the point that everybody has been really knowledgeable of what’s required in these shows.

“I love the fact that we don’t know what they’re going to say, the kids or the adults, and we have licence to obviously talk back to the audience.”

Breaking the fourth wall is the easy part for Petty and his colleagues, but he’s candid about some of the challenges of running a for-profit theatre company in the city — finding sponsorship funding in particular.

“I’m really proud of the fact that we’ve been able to have this kind of longevity, because producing live theatre is a tough way to make a living, particularly if you’re a for-profit company, as I am,” he says. “Most everybody else, whether it be the National Ballet or the Opera Company, CanStage, Soulpepper or whomever, those are all not-for-profits, and they’re able to access government funding to help them make their nut.

“But I have to get all my money through sponsorship and hosting events. It’s an interesting way to put a budget together.”

CIBC has just entered the first of a three-year commitment as a backer for Petty’s production company.

Aside from the administrative challenges, Petty says he’s content with the foundation he’s built with his wife. Though she left after ’96 to focus on ballet, he’s continuing in his role of entertainment for children.

“I’m at a point where new pastures, greener pastures, don’t particularly interest me,” he admits. “I’m happy to keep the tradition of these shows going, because we’ve built up such a loyal following over all these years.

“It’s tough enough to keep that one show afloat, just from a financial perspective. I have no aspirations beyond the status quo.”

Though he may play the villain, he acknowledges that what he’s done is introduce young audiences to something magical.

“What really makes me proud is to be able to introduce our kind of theatre, which is so accessible to children, and they go on to become the audiences of the future — not just here in Toronto but Stratford, Shaw, Broadway or London’s West End,” he shares. “So, I think it’s a really, really necessary part of a kid’s education process to become involved in live theatre at a young age.”