Ontarians should brace for more tax hikes and wasteful government spending if they vote for the Liberals in the next provincial election, says Rocco Rossi, the Progressive Conservative candidate for Eglinton-Lawrence and former mayoral candidate.

Seizing the momentum of the federal election, the Ontario Progressive Conservatives embarked on a media tour to test the party’s talking points ahead of the provincial election set for Oct. 6.

Dubbed the Blue Blitz, the day-long affair saw 70 candidates and MPPs visit 70 communities across Ontario, including Rossi’s stop at the offices of Multimedia Group of Companies, home of the Town Crier.

With his political sights set higher this time around, the former Liberal fundraiser turned Tory, Rossi incorporated into his pitch the motto that won his former rival the mayor’s job.

Accompanied by Kevin Gaudnet, the PC candidate for Pickering-Scarborough East, Rossi attacked the litany of taxes identified with the McGuinty government, including the HST, the health tax and the eco-tax.

Rossi also criticized two controversial deals, which he repeatedly refered to as the “secret deals,” the details of which the provincial government kept closely guarded until ultimately sealed.

Despite opposition from local competitors, the province awarded multinational electronics manufacturer Samsung a $7-billion contract in January 2010 that will see the renewable energy giant open four plants between 2013 and 2015. Two of the facilities will make wind towers and wind blades while the other two will assemble solar modules and inverters.

The province’s deal with OPSEU, which won members of the province’s largest public-sector union a one percent wage increase, also featured as a talking point.

Time to do something else: Caplan 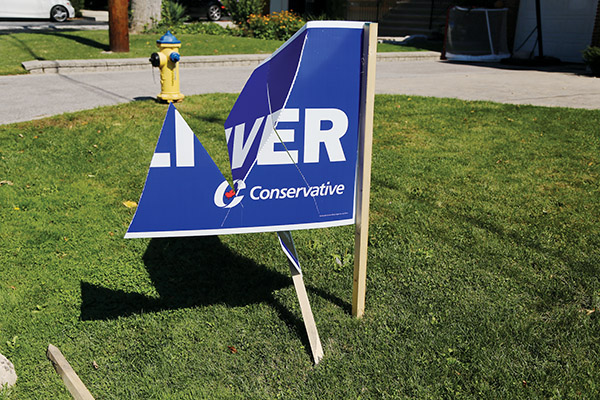