A city-approved plan to redevelop a subdivision at Valley Woods and York Mills roads has some local residents worried the project’s scale will make way for unprecedented growth.

In September, council approved an application from Alit Don Valley Property to demolish an existing 245 rental townhouses and replace them with 270 rental units and 1,610 condominium units. Adjacent to the Don Valley, the 5.6 hectare site comprised of two parcels of land. The plan calls for five buildings on the north parcel of land, while a mix of tall, mid-rise and low rise buildings, including stacked townhouses, are proposed for the south.

After being jockeyed back and forth between North York community council and city council this summer, the application was approved with amendments that included fewer units, and a height cap at 24 storeys.

The plan is the biggest for the neighbourhood in recent years, says Wendy Dobrijevic, vice-president of the Don Valley East Residents and Ratepayers Inc.

She said from the plan’s outset, residents were concerned about an increase in traffic, noise and negative impacts on the nearby ravine.

The association was particularly concerned that the proposed condominiums would set a height precedent for the neighbourhood. The preference, Dobrijevic says, was a cap at 22 storeys, and nothing over 12 storeys near the ravine.

“We didn’t want the next developer to come in and say, ‘well, you gave them 27 storeys so we want 32 storeys’,” said Dobrijevic, who designs area councillor Denzil Minnan-Wong’s office newsletter.

The original 2007 proposal called for 2,375 residential units with up to 32-storey condominiums.

Though a working group was created and several public meetings held, Dobrijevic said residents had difficulty at the negotiating table.

“We felt like we were backed into a corner because we had this underlying threat of the (Ontario Municipal Board).”

Dobrijevic said her group decided to back down from an appeal bid at the OMB, as they were informed they’re chances of winning were slim. If they had loss an appeal, the developers would be under no obligation to donate money for local park improvements, known as Section 37 funds under the Planning Act. According to Dobrijevic, the residents association itself would have stood to lose $250,000 in lawyer and planner fees.

“I don’t think anybody was happy with the final outcome but some concessions and accommodations were made,” he said.

To mitigate traffic infiltration onto Valley Wood roads, council voted to eliminate a planned road connection from the project’s north site to Valley Woods Road, and have it replaced with a plan for a cul-de-sac.

“So now residents from the north part of the development can only enter and exit onto York Mills Road,” Minnan-Wong said.

Council was also able to secure $2.25 million in community benefits, which includes a contribution of $1.75 million for a community centre facilities on the Brookbanks library site, or for community recreational facility in the area, and a cash contribution of $250,000 to be used for capital improvements to publicly owned, local affordable housing projects, Another $250,000 for future rehabilitation and/or renovation of Milne House.

The developer will also provide a tenant relocation and assistance plan for renters in existing units. 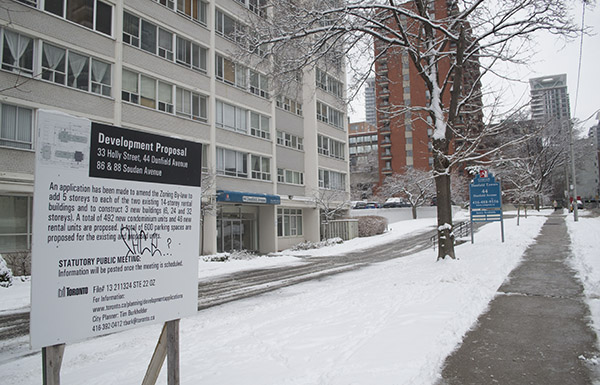 One thought on “Scale of project scares locals”