“It was originally scheduled to be completed earlier this year but there were delays with construction of completing the shaft,” said Lou Di Gironimo, general manager of Toronto Water. “We ran into issues while we were digging that deep shaft and now we’ve run into this issue of grouting it.”

The two contractors, McNally Construction and Aecom Canada, have dug two shafts to access the nearly 5-km long sewer. One is located at Coxwell Avenue and O’Connor Drive and the other at Taylor Creek Park.

The depth of the sewer posed a problem as it is 40 metres underground at the Coxwell and O’Connor location. Now the contractors must seal the shaft against the sewer to ensure there is no leakage.

“It’s kind of like your basement where you’re building your foundation wall, you know, you sometimes get water coming in,” Di Gironimo said. “Well, we’re in pretty deep so there’s lots of ground water and we’re having trouble sealing the shaft up against the existing sewer because the outside of the existing sewer was constructed in a very irregular fashion.”

The impact of the construction is very localized at this point in the project. No roadways are blocked and no services have been disrupted. Toronto Water said they have been in contact with homeowners who are in the immediate vicinity of the two shafts and inform them of the project’s progress.

Ward 29 councillor Mary Fragedakis says her office has received noise complaints from local residents due to the hours of construction. Because the sewer is still in use, some of the construction must be done between 1 a.m. and 6 a.m.

“The water has to be at low flow so there are times that they have worked through the night because when most people are sleeping they’re not flushing their toilets,” Fragedakis said. “So that’s part of the challenge.”

As with most major infrastructure projects, extensive before and after photographs are taken of properties that could be directly impacted by the construction. Fragedakis said any damage incurred during that timeframe would be covered under the contractors’ insurance policies.

“If there are cracks to their foundation and if there are cracks into the walls of the house and the ceilings from the work, that is covered in the insurance and they will be compensated and it will be fixed,” she said.

Toronto Water has met with residents and is in the process of finalizing a landscaping design plan for the Coxwell Avenue shaft site. Landscaping is scheduled to take place after the repairs are complete in late fall with additional tree planting likely occurring in the spring of 2012.

Fragedakis said although the repairs have faced delays, they are quite necessary and she hopes residents are understanding.

“It’s a very important project and there’s some danger involved too, so unfortunately this delay is a nuisance for the local community but I think safety trumps that,” she said.

The trunk sewer, which handles the flow of sewage of about 750,000 people, has been in continuous use since 1960.

After an initial structural review in 2008, it was discovered that 60 metres of the pipe was damaged, although it is unclear how it was damaged or for how long. 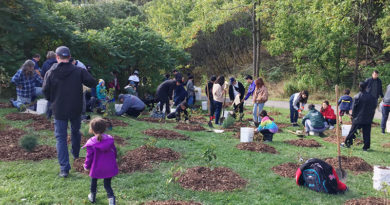 120 new trees and shrubs planted in under an hour