Work has begun on the much-anticipated Neshama accessible playground in Oriole Park, but it hasn’t been without its setbacks.

Construction was delayed in order to obtain a better contract price, according to Councillor Michael Walker’s office.

“Initially, we were supposed to start construction in the spring,” said Blake Webb, executive assistant to Walker.

But with federal government’s stimulus spending on infrastructure projects, construct demand was up and so were costs, he said.

“It went out for tender and bids came back higher so it had to be re-tendered,” Webb said.

Construction started in July and should wrap up in late November or possibly December.

This has meant accessing the park has been a challenge, which is a complaint local senior Carolyn Box mentioned to the Town Crier.
Play equipment has now come down so there is nothing for kids to use meanwhile.

And she had other concerns.

“A year ago, (Councillor) Michael Walker had new tennis courts put in but they are blocked off. It’s incompetence and lack of planning,” Box said. “In June, they tore down the washroom and put up a port-a-potty in a fenced-off area for workers (only).”

She also complained the regular path through the park is out of commission during construction and a temporary mulch pathway is not lit, gets muddy in the rain and is not as easy to navigate.

Webb confirmed there’s a temporary mulch pathway during the construction phase. A permanent paved pathway will be in place by the end of November even if the rest of park construction is not completed at that time, he said.

The overall cost is $1.7 million with about one million coming from the city through developer contributions to community benefits and a parks levy fund. Tom Caldwell and Steven Skurka have spearheaded community fundraising for the remaining $700,000. The pair, plus others known as “A Bunch of Guys” came up with the idea for an accessible children’s playground in Oriole Park about five years ago.

Elements in phase one of the junior play area include: a splash pad for smaller children, seesaws, rocking toys, a playhouse and climbing structure, swings with accessible seats, a frisbee style swing that can hold multiple children and regular swings.

As well, when the first phase of the playground is complete it will feature a senior child-play area with climbing apparatus, a spinning play structure, rubberized natural-coloured ground covering as well as bright coloured inserts on the ground for visibly impaired.

There will be a sand box with an accessible play table and a water table for kids with disabilities and spray toys. 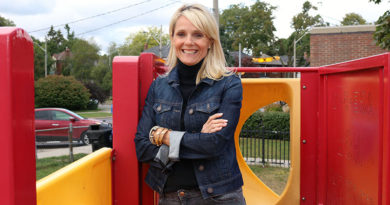 Under too much water