The transition from being an International Ski Federation skier to representative at CISAA for The Bishop Strachan School has been one of patience for Nikole Benson.

The 17-year-old made the tough decision to slide away from skiing competitively with her coach Bebe Zoricic at Craigleith Ski Club in Collingwood to focus on academics.

Though there is some trepidation in her voice when describing how she feels about the transition, she says she’s happy to be coaching younger skiers on the weekends.

“It’s definitely a change of pace going from trying to push myself, and the intensity of FIS, and now I work out with 8-year-old girls,” she admits, sitting inside a small office at BSS the Friday before OFSAA.

But there are no regrets, she says. This year she’s helped her fellow Bobcats — Willa Stevenson, Sloane Keilty, Miranda Thompson and Kate McDevitt — qualify for OFSAA at Blue Mountain. On Feb. 24–25 she finished seventh (total time 113.92) in Level 2 girls slalom and 12th (81.06) in giant slalom, while the troupe finished third, with 53 points, in girls slalom team and fourth, 59 points, in giant slalom team.

Benson’s path leading up to their OFSAA results was a well-carved one. On Jan. 15 she finished first in the giant slalom at Alpine Ski Club, on Jan. 29 she grabbed her second first-place finish in the slalom and on Feb. 5 she finished third in the combined slalom and giant slalom.

It’s renewed some optimism in her Bishop Strachan coach, Sheila Barclay, who was thrilled Benson joined the team.

“I feel really happy that I have been able to give Nikole that opportunity and I know that she’s really enjoyed it,” Barclay said. “The transition from racing so seriously to just coaching on the weekend can be a really difficult one and this has given her the chance to still enjoy that competitiveness.”

In only one season Benson has taken up the mantle of mentor for the 10 Grade 9s that make up the school’s 13-member ski team.

“She’s also been a phenomenal leader for the team this year, and mentor,” Barclay said. “She’s fabulous with the Grade 9 girls with training, and also being encouraging, giving them school advice.”

Having nine years of experience on the hills has factored into that. Benson has been skiing since age 8, and went competitive when she turned 9.

Her coach at the time was Slovenian Darjan Gantar, whose goal, she said, was “to just take a team at a young age and take them to the top, because he had such a love for skiing.”

“I was with the same group of kids for five years.”

By 15, she had her FIS card. Now she’s passing on her knowledge to her teammates at BSS. And they’ll need it because their city rivals, Greenwood College School, vied for OFSAA gold with them.

“Greenwood has some really competitive girls who are starting up what I had done in the past few years,” Benson said. “They are giving us a run for our money.” 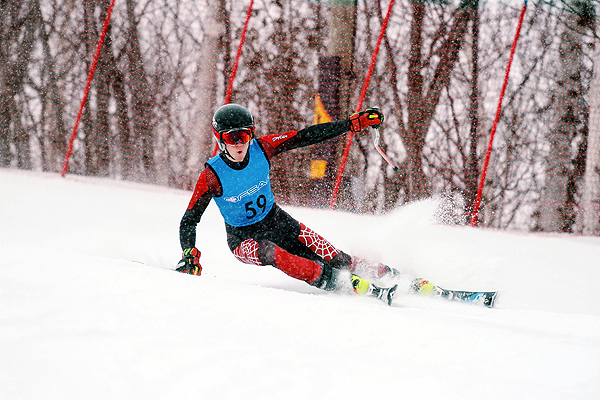