Don Mills CI tandem of Ibrahim and Stowe too dominant

Led by perimeter player Isse Ibrahim and post-presence Johnathan Stowe, the visiting Bruins came away with a 66–51 victory.

The Panthers were able to stay in the game during the first half, down only five points after the first quarter and six after the second. However, Don Mills outscored Victoria Park 21–4 in third.

Don Mills opened the second half on a 10–0 run sparked by Stowe’s eight third-quarter points. Panthers’ coach Tyrell Smith tried to counter by switching to a full-court press defence.

“The best way to guard him would be to double team him and then when you double team him he’s also a good passer so he’ll find the open man,” Smith said. “It was kind of difficult to stop that inside presence.”

Feeding the hot hand of Stowe on most plays was Bruins’ swingman Ibrahim. Two of his 19 points came off of a two-handed fast-break slam. But his most notable contributions were the passes he sent to Stowe in the post.

“They’re small inside so today was his game,” Ibrahim said. “I just tried to make him look good.”

Stowe scored a game-high 29 points and operated as Don Mills’ main release valve breaking the press but tried to keep the credit and focus on his team.

“Really, I complimented my team mates,” he said. “They set me up and got everything done today so I’m very happy with the win. That’s all I wanted.”

With the one-two punch of Stowe and Ibrahim, the Bruins want to s go deep in the postseason.

“Right now we’re focussed on making the playoffs and making a run,” Stowe said. “We’re trying to get past the first round.” 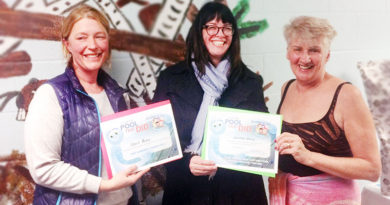