The volleyball rivalry between Riverdale and Danforth has been put to rest for another year, as the senior boys Redhawks ousted the Raiders from South Region contention.

“Danforth by far was the favourite,” he said. “I was pretty proud of our guys in the sense that on paper we didn’t have the firepower to match them because (the Redhawks) have only dropped one set all year.”

Part of Riverdale’s strategy was to assail Danforth with strong service and blocking when their captain Aidan Haslett was in the backcourt.

Top performers on defence were Michael Aleksic and Alan Zhu who made some key crosses and blocks, especially during the second set.

Additionally, Zhu’s service in the first two sets along with teammates Brian Nguyen and Henry Lee kept the game close.
Still, their energy was sapped during the third set.

“It really came down to some mental errors and though we tried to tell our guys to play relaxed. The reality of a semi-final game, having three or four seniors on the team — the reality of the magnitude hit them,” Wakelin said. “I know they’re a little disappointed. They worked hard and it wasn’t for a lack of trying.”

With only one club player suiting up for the Greenwood Avenue school — Haslett — Graul is impressed with the turnaround of his soaring Redhawks.

“We played a lot of tough games this year so even though we were down second match 23-21, we knew we were going to come back,” he said. “We have a lot of confidence in our abilities and our defence is strong so that’s how we like to block — strong.”

Though the senior Raiders failed to advance to the finals, the balance of power is in Riverdale’s favour at the junior level as they took Danforth out of the equation, winning 2-0 (29-27, 25-17) the same day.

Awarded for excellence in taking care of school 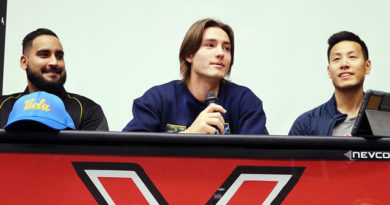