It was a cold night at Scarborough Arena, and the Leaside Flames were in tough against the East Ender Ti-Cats.

Scott Munn, the Flames’ captain, was chomping at the bit not just because they were down late in the game, but that he had 49 goals.

“One shift I had it, I was on the goal line and I got absolutely robbed on a wide open net, I missed,” said the 13-year-old Munn, sitting in his Leaside home with his parents, Kim and Jeff.

Humble in demeanor, Scott recollects a tough game, but he made up for his previous folly.

“Later in the shift, I skated around this guy and scored, and I was just so happy that I actually scored after missing that,” said Scott, who has been skating with Leaside since he was five. “I didn’t realize it was my 50th goal either.”

“We were clueless,” Kim recalls, laughing. “It was when they came out of the dressing room, they were like ‘Right on, that was his 50th, [coach Rob Stanley] just did this little thing,’ and we were like ‘Really?’ ”

“They’d arranged to have the puck kept, even the head referee kept the gamesheet, and handed it back to us,” said Jeff.

Folded neatly, and scored in pencil, Scott shows the gamesheet, a memento that may be framed.

“I didn’t think at all that I could do this,” said Scott, who focused on his skating and speed this season. I set a goal at the beginning of the year to score 25 goals, so I’ve doubled that. I wasn’t even expecting to score 25 goals, but that was the goal.”

It’s a torrid pace, and Stanley gives Scott massive credit for his hard work and attentiveness.

“If I had told him to jump into the penalty box and do a dance, he’d probably do it.”

It was also the Flames’ 33rd game of the season, a successful campaign where Scott’s Minor Bantam A Flames clinched the Kraft Cup, losing only once in 36 games. The Flames also topped the standings with 200 goals, and Scott’s 55 goals and 94 points lead the age class.

Scott’s contributions aside, the Flames have a broadly skilled, close knit squad, and notwithstanding their match against the Ti-Cats, the Flames have had to battle for many wins this season.

With six one-goal victories under their belt, the team has gone as far as the strength of their bond as friends and teammates, something that Stanley can’t coach.

“This year’s team gets along better than any team I’ve had before,” Stanley said. “When we go away on tournaments, these guys are inseparable.”

“Off ice, they just enjoy doing everything together,” Kim said. “We’ve been so fortunate to be apart of it, but it seems very unique to a team because these guys just love hanging out together.”

Despite this dynamic, Kim and Jeff applaud Stanley for the discipline and passion he instills on his squad.

“He’s a really great role model, as a man, to be quite honest,” Kim said. “As a dad on tournaments, as a husband, but as a hockey coach, he’s got this really great combo of being supportive and empowering these kids.

“He’s not all roses, he tells them some honest feedback. But, it’s always to improve the game or the skill.”

As of press date, the Flames are in the second round of the playoffs, awaiting their next opponent. In three playoffs games against the Willowdale Blackhawks, Scott had three goals, and two assists.

It is this tremendous skill that Stanley appreciates about Scott.

“There was one thing I wanted to say last night that I forgot to once we started talking. I don’t think Scotty knows just how good he really is,” Stanley wrote later, in an email. “He’s not cocky, but instead he just plays the game for fun and wants to be one of the guys. There’s no superstar ego in him, and the fact that he’s still figuring out how good he is means that he’s still going to get better.

“That’s the scary part for the other teams in the league … he’s already the best player in the league, but there’s even more upside to come.”

Will big win fan the Flames? 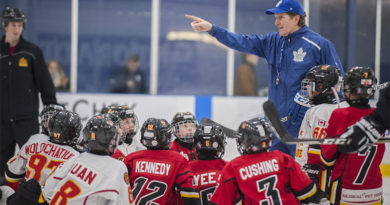