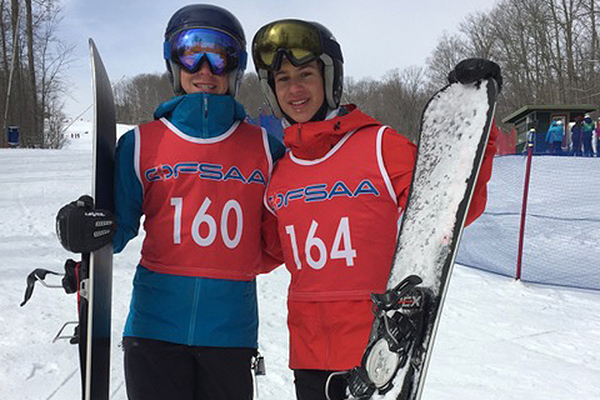 There’s no bad blood between brother Adam and Jacob Farber, even if the latter finished 0.07 seconds off the podium from his fraternal roommate, who claimed bronze.

The twins competed in the open boys’ snowboarding festival at Beaver Valley Ski Club, March 1–2, and they did not disappoint, representing Forest Hill Collegiate at the provincials.

Preparing for a trip to Copper Mountain, Colo., the Grade 9s took a moment to talk shop and about their future goals of competing for the national team.

“That was pretty crazy considering I was only in Grade 9, and people in Grade 11 and 12, who are a foot taller than me, were on the podium beside me,” Adam Farber said.

“It was a great fight in the last run. I came out .07 seconds behind Adam, and the podium but it was still a fun race,” Jacob added.

The duo has been snowboarding since the age of five, and have been racing competitively since seven. And they are busy. Once their Colorado trip is over, they’re off to Mount Tremblant for the Canadian Nationals.

“I am the chauffeur and the cheerleader. My husband (Joel) snowboards as well, so I’m the one at the bottom of the hill, cheering them on,” Jennifer Farber said. “I’m really, really proud of them. I’m proud of their passion, dedication and energy. As a mother, at the end of every race, I’m glad they get down the hill safe.”

Sylwia Halas and Andrew Oosterhoff helmed the Forest Hill team this year, and the twins are also following the path of their Falcons’ predecessor, Andrew Hildebrand, with coaches Jonas Brook, Danielle Courchesne and Ryan Crawford up in Collingwood.

They even have similar sources of inspiration in Jasey Jay Anderson and Darren Gardner.

There’s more to come from the Farber twins, as they look to pursue Canadian Nationals, NorAm Cups and the World Cup circuits.

Until then, mom is content with them keeping things academic before next season comes. 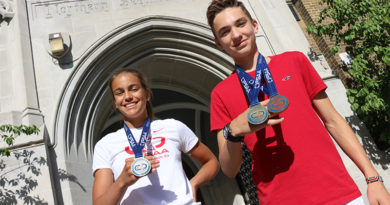