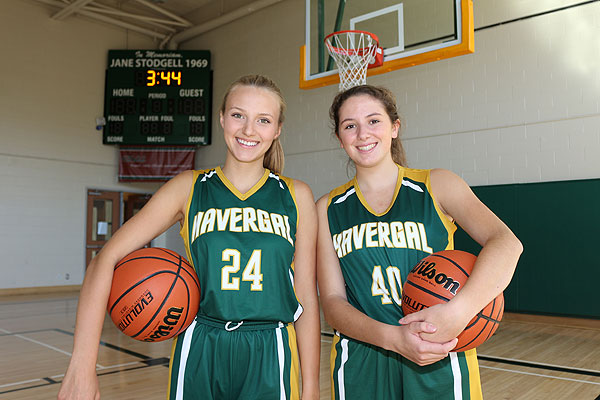 Havergal College is giving new meaning to the triple-double.

The senior girls basketball team has three strong players at the guard position, and their names are all Emily.

Callahan, Dotsikas and Anderson will be anchoring a roster that already has a few years experience at the senior level, even though they’re in Grade 11.

It was a dilemma head coach Melanie Belore faced in 2013.

“Last season was a little different for us because we were really young,” she said, in the phys ed office at Havergal. “Actually, we had to pull up a lot of our core girls from the U16 team to play on the U20 team, which is actually great because they have a year of playing senior ball under their belt now.”

With only one Grade 12 on the team, Belore brought in Dotsikas and Callahan to boost the troupe. The two eventually won junior athlete-of-the-year honours.

“The Emilys, as I call them, they compete really hard against each other,” Belore said. “They’ve definitely stepped up and taken leadership roles, both on the court and by doing by being vocal.”

Ask the duo what it’s like to play with three Emilys on the same team, and they’ll laugh. That’s not to say it’s confusing, but it opens the doors to possibilities.

“It’s kind of confusing, but it’s kind of nice because you know you have someone to pass to,” Callahan said.

The Gators will be in tough, and have some company at the Division 1 level with midtown schools St. Clement’s and Bishop Strachan seeking playoff action too.

Top priority for both Callahan and Dotsikas is to seek redemption for an early bowout in the quarter-finals in 2013.

“We’ve learned that it’s harder when you’re a younger team, but this year we’ve been playing with other Grade 11s,” Dotsikas said. “[The rivalry] kind of changes from year to year.

“In practice, we never talk about who our rival is going to be.”

Belore said the squad assesses the season on a game-by-game basis.

“I always like to say we try to focus on what we control, so if we do that rather than thinking about the competition on any particular day — we do what we know well — we come out on top in the games,” she said.

Also looking to make an impact this year will be newcomers Maddy Kennedy and Isabelle Caven, who both play at the post position.

“She’s one of our post players, and she’s also one of the fastest girls on the team,” Belore said of Kennedy. “It’s been really great to see how hard she’s been working in practices.

“Her and the post player, Isabelle Caven, will play a big role around the basket for us.”

Saints ousted in third round of OFSAA