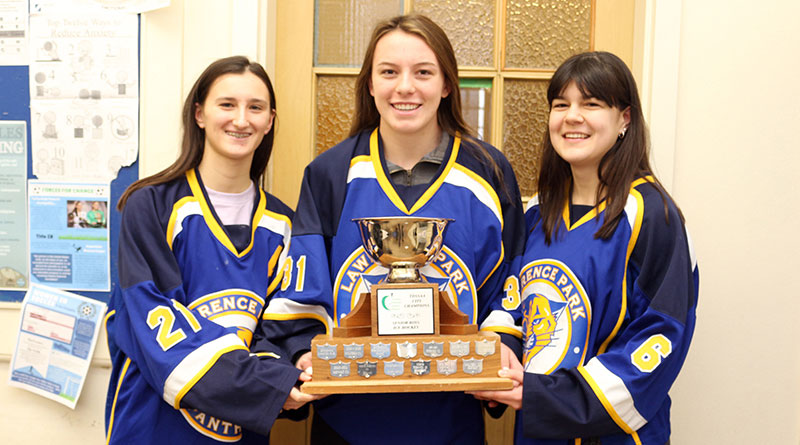 The troupe netted its third straight title Feb. 28 with a 3-0 win over Humberside Huskies at the Mattamy Athletic Centre. Alyson Reeves had two goals and an assist, and Kate Selby added another goal.

Four of the team’s members sat in an LPCI classroom in early March, readying themselves for another run at OFSAA gold. Reeves, with Cassie King, Emily Carew and Maddy Fisher were on the 2018 OFSAA the team that was eliminated in the quarterfinals. It’s something they’re hoping to avoid in 2019.

“We’ve had success the whole season,” Reeves said. “We didn’t lose a game, which was impressive and we needed to keep that alive.”

“We’ve been at LP for three years now and this is the third year in a row winning Citys,” King added. “It’s definitely good to keep that alive.”

Past fixtures of the team, like Quinn Johnston, Riley Smith, Riley Samson, Veronica Moore and Emily Morgan, have moved on but the new batch is rearing to keep the tradition of winning thriving.

“Coming off last year, we lost a lot of Grade 12s,” Carew said. “This year we had a lot of rookies so they’ll be able to continue to do what we’re doing in the program.”

This was also the first year the team has made OFSAA without coach Karen Daigle. She’s currently on leave from the school, but Suzanne Sparrow has filled in the interim.

As well as Reeves’ dad, Fraser.

“I’ve been used to it because he’s coached me for the last seven years,” Allyson said, adding with a laugh, “I’d rather not have him there though.”

It’s not a far stretch the Panthers can win OFSAA. In 2016 the squad won gold and in 2017 the troupe returned to the podium for a silver. The girls look forward to the trip to Midland from March 20 to 22, as well as the banquet held on the second day.

“You’re also representing your school at the highest level you could play,” Fisher said.

Their first match will be against Eastview Secondary from Barrie as they square off in Pool A.