Their serves created mistakes, they volleyed with precision and they looked calm after losing points.

Such was the trend at the University of Toronto Scarborough campus Oct. 17 as the Lawrence Park Panthers boys’ and girls’ tennis teams won the city finals, with the boys routing Victoria Park 8–0 and the girls topping Earl Haig 5–3.

The girls team has now defended its title for the second time. The boys clinched their first city title in tennis since 2011.

With four courts of doubles tennis — the first court earning three points, the second two, and the third and fourth one each after a team won eight games in a match — Lawrence Park had a near perfect finals, losing only one match between the girls and boys teams.

Cheung-Damonte and Camer, admitted afterward they were nervous throughout the match.

“I get stressed, like everyone is watching,” said Camer, who has been on the team three years.

But, they had remarkable moments in their match, gaining a 3–0 lead early. Cheung-Damonte, a first-year player, showed prowess at the net, creating difficult volleys against Earl Haig’s resilient forehead winners.

“I practice volleys a lot, so I knew I could make them,” Cheung-Damonte, said.

But Hassan and Seifaei played tough, winning rallies and keeping calm at the net. With the tiebreak win, they handed the Panther duo their first setback of the season.

Jaksimovic served with power, keeping the returners out of position for most of the match.

“We had a good chemistry going on, I was serving well,” said Jaksimovic, who stands about six feet tall. “We were really focused, we didn’t ease up and we did well.”

Pavkov, who partnered with Austin Wood last season, had chemistry with Jaksimovic, communicating well between points and taking up most of the volleying responsibilities at the net.

Physically and mentally, he says, he was ready to go from the outset.

“I felt good,” he said. “I was much more consistent, and my timing was better.” 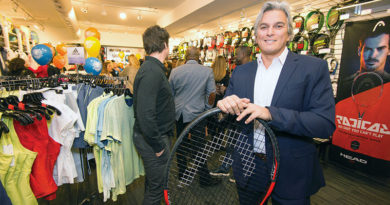