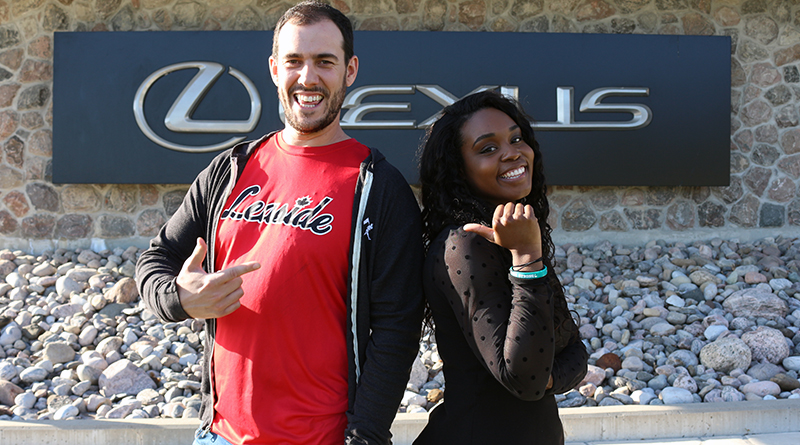 The league has scored one of the biggest sponsorship contracts in its history by securing Lexus on the Park as full sponsor. That means baseball camps, competitive teams and the houseleague association will get a chance to swing for the fences.

Amid the 2018 models of Lexus cars at the Leslie and Eglinton dealership were the league’s Executive Athletic Director, Eric Stickney, and Lexus on the Park’s marketing coordinator, Cassandra Wiltshire.

The sides have been working on a partnership since the fall, and it just happened that the owner of Lexus on the Park had a little more to give this year.

“Our owner Pat Priestner, and his wife Diana, every year they give to their dealership in order for them to give back to the community,” Wiltshire said. “I think realizing how much money he had, to make a difference, really impacted him this year.

“It made him want to go out and do more than just write a cheque.”

“He actually lives in Leaside. It’s very near and dear to his heart,” Wiltshire added. “Usually, when we are reaching out to the community, because he does love to give back, we usually focus in the areas around us.”

In the past, they’ve sponsored soccer, baseball and hockey on a smaller scale — jerseys, tournament, and so on.

This time though, by sponsoring the entire league, the engines of all the kids will be revved up.

“You’re not just helping one team. You’re helping over 30 rep teams and over 60 houseleague teams,” Stickney said. “We can put this money into infrastructure that’s going to help, not only the teams this year, but years to come.”

The amount of money was not disclosed by Lexus. They kept their signals secret for the time being. However, the ballpark figure will help upgrade Talbot Park, as well as provide some finer details to Bennington Heights.

Stickney noted there is a shortage of diamonds in the city, and the money will help get what is in the possession of the league up to batting lead-off.

Ten years ago, Stickney set out to make the league one of the best in the city, and part of that, he said, is with partnerships like this one.

“My dream was for Leaside Baseball to be the Mecca of baseball in Ontario. When you go down to the States, like Florida, you see the quality of how good it is,” he said. “If we’re really interested in achieving that goal, it’s going to be partnerships and sponsorships like this that are going to allow us to do that.”

As thanks to the dealership’s support, Leaside will promote their junior baseball team every Tuesday or Friday night with a game under the lights for the community.

In the end, Wiltshire said they want to steer other companies into more community involvement.

“We hope that after next year other companies will see how impactful their participation in the community can really be and take more of a role. I’m not saying they’re not, but they can become inspired.”