Leaside has lost a skilled teacher and unforgettable volunteer.

David Stickney, 71, died on Monday after suffering heart failure and collapsing on the field while coaching the York Mills CI girls softball team at Goulding Park in Newtonbrook.

Son Eric, seated in the bleachers at Talbot Park three days later, recalled that his dad’s love for sport started when he was 12. He lost his father, Ralph, when he was 14. Coach Ewart (Lefty) Bagg, known for having one of the most competitive house league teams during the 1960s, took on the role of father figure, and young David ended up making the cut the second time he tried out.

“Having Lefty as a baseball coach, he became a father figure,” Eric Stickney said, adding Bagg came to live with the family at their Leaside home. “Lefty became kind of like my grandfather.”

David Stickney would go on to become recognized as a volunteer around the Leaside community. A founding board member of the Leaside Sports Hall of Fame, he also shot team photos for the Leaside Baseball Association and was active in the Leaside United Church community. He even vowed to keep clean the steps leading to the football field behind Leaside High School.

“He slipped on them one year and kind of hurt himself,” Eric said. “He vowed that no one else would slip on those steps, so he said he’d shovel those steps every time it snowed.”

He taught math at Leaside High School for over 40 years, eventually becoming the head of the department.

“He was very effective, and always geared towards the dedicated, hard-working students,” Eric said of his father’s teaching style. “He was an old-school guy who wouldn’t put up with any guff, especially in today’s age where the students have so many rights.

“He could really command a classroom well with very few words, or just a look.”

Leaside Baseball Association president Howard Birnie, who played baseball alongside him, said he would often strike up a conversation when the elder Stickney walked by Talbot Park.

“He was calm, had a great sense of humour and a great perspective on what sport is about,” Birnie said.

Funeral services will take place May 25 at 1 p.m. at Leaside United Church. A small memorial will be held outside on the church’s property after the service. 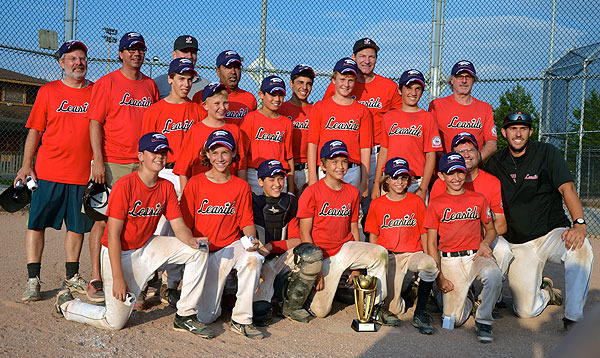