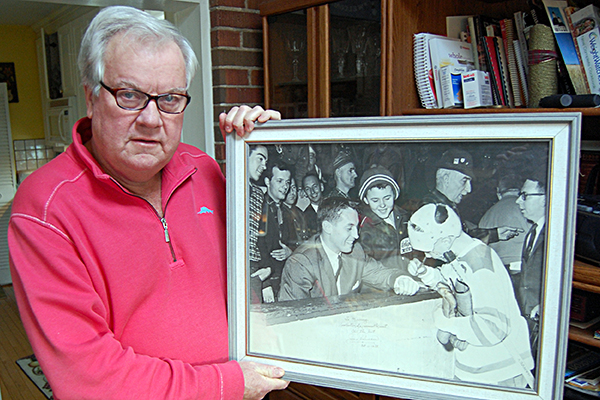 Murray Rowlands might be the only person with Jean Beliveau’s autograph on a picture that shows him signing one for the late Montreal Canadiens great.

The 62-year-old Leasider shared the story of how he came to sign the cast of an injured Beliveau this morning, on the day the NHL legend would be laid to rest following a state funeral in Montreal.

Beliveau played his entire 18-year career with the Canadiens, winning the Stanley Cup 10 times. He later won seven as an executive with the team. Beliveau died Dec. 2 at age 83.

As a kid, Rowlands was a top-flight hockey player in Quebec, at one point ranked No. 2 in the province, between Guy Lafleur and Marcel Dionne.

His fateful encounter with Le Gros Bill, as Beliveau was known, came during the 1964 Quebec International Peewee Hockey Tournament at the Colisee de Quebec. A 12-year-old Rowlands scored hat tricks in back-to-back games for his Town of Mount Royal team. It was after the second game that someone grabbed him before he left the ice and directed him to Beliveau’s rinkside seat.

The then 33-year-old Beliveau, who was nursing a broken wrist, asked Rowlands to sign his cast. A picture was taken of the moment. In the centre of the photo a young Lafleur is seen looking on.

By the next season the Rowlands family had relocated to Rosedale. His mother, June, went on to become Toronto’s first female mayor. He went on to play junior hockey with Toronto Marlboroughs, but injuries cut short his NHL dreams.

Almost 25 years after his famous encounter, through his wife Gretchen Van Riesen’s boss, Murray got the picture signed by Beliveau. The message, signed and dated Oct. 11, 1988 by Beliveau, reads: “To Murray, recollections of a memorable event. All the best.”

While Rowlands never made it to the NHL, he did regale his greatest feat — a nine goal game in which his grandfather had promised him 50 cents for every goal he scored.

Short roster runs out of fire in the third