You could call it We The North Toronto.

The DeMar DeRozan Slam Dunk Book Club is coming back to North Toronto this year, after a successful launch last year out of Ledbury Park School.

This year the mixed basketball and reading club for elementary school age boys is at John Wanless Public School, Saturdays from March 7 to May 23. It involves a half hour of reading, followed by an hour and a half to two hours of basketball.

Toronto Raptor and NBA all star DeMar DeRozan also comes to visit the kids during the program, and at the end the kids get to attend a Raptors game.

Founder Patrick Rutledge, a North Toronto resident, says basketball is a popular incentive to get boys to read, and by the end of the program it’s just as competitive as the sporting part.

“They make the reading part as competitive as the basketball part,” he said. “They find out they like this reading thing.”

A key part of the program is teaching the kids the old adage that practice makes perfect, Rutledge says, and that just like sports that holds true for reading as well.

“Practice is to the game what homework is to the test,” he said. “We’re trying to teach kids that you don’t step on to a basketball court immediately knowing how to dribble and shoot any more than you pick up a book and know how to read and understand what the characters are going through.

“You have to learn those things.”

Rutledge says the program helps kids become “better students and better basketball players,” and that the boys will strive to become better “because a role model is very important to them.”

DeRozan agrees and says he wants to be the one the kids look up to while learning it’s important to get an education.

“Reading is a skill they’ll need for life and key to their success,” he told the Town Crier in email. “When I was a kid, I wanted someone to look up to and I want to be that person these kids look up to.”

Rutledge says DeRozan is “a big part of the success of this program,” beyond merely lending his name to it.

While DeRozan says his favourite part is the day he comes to the kids’ gym to visit and “hang out and talk with them,” he’s also been vital to seeing the program continue. One year, in which funding cuts to after-school programs threatened the book club, DeRozan didn’t hesitate in giving $15,000 to keep it running.

“I didn’t want the boys to lose out,” he said. “They were improving their reading skills and the program was gaining momentum so it was a no-brainer to me to step up and donate the money.”

Rutledge says he’s hoping to make the program citywide by 2017. For now, he’s hoping this year will be another success story.

“Hopefully they come away with a good experience,” he said. “And hopefully they enjoy finding out that reading is as much fun as hitting a three-point shot.”

DeMar DeRozan book club back for another year 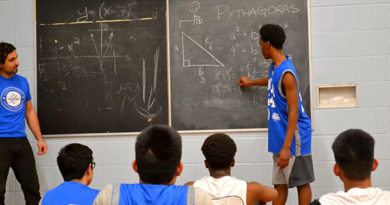