This is the last year Andrew Hood will wear the storied Malvern “M” on his chest while playing hockey.

The next time the Upper Beach native hits the ice it will be in New Hampshire with American preparatory school Brewster Academy.

It’s all part of his pursuit for an NCAA Division I scholarship, but don’t think he won’t miss the land of Black Knights.

“It’s the only thing I know, but I just think having the opportunity to go to a prep school in the States and live away from home, play great hockey is too big of an opportunity to pass up,” he said.

The talented forward, who models his game after the NHL’s Patrick Kane and Pavel Datsyuk, played the city final qualifiers for his high school team and GTHL squad Toronto Red Wings.

It was on the suggestion of his trainer Bob Acton that Hood began looking into the possibility of heading south.

“For a few years I’ve been training with him during the summer, off ice, and last year he just introduced the idea to my parents about U.S. prep schools because his son went to one,” he said.

Though Hood plays at the AAA level, Black Knight coach Brian Spanton admits there was never an ego.

“Andrew always regarded his school hockey highly, was very committed and quite frankly was one of those guys, whether you’re a coach or a spectator, you should pay admission for,” he said. “He’s skilled, a pleasure to watch, such a great skater.”

Hood himself speaks about his team with high regard.

“Just playing for Malvern, having the opportunity to play with great players who went to Malvern and are still at Malvern provides me with so much.”

This year was the furthest the Black Knights have gone with number 11 on the squad. Losing to Sir Oliver Mowat 3-1 and a qualifying game to Leaside Lancers 3-2 was deflating, Hood admitted.

“It was really tough not being able to move on to OFSAA,” he said. “I think that was a huge disappointment for our whole team.

“If we had a chance to do it over, it would be different.”

Hood is coy when asked where his finesse comes from. He inherited it, he suggests with a laugh.

“I’ve always been more of a goal-scorer, play-maker, offensive-minded player.”

Hopefully, with a little time and effort, the NHL won’t be just a dream.

“It’s still a long way away,” he said. “There’s a lot of work to be done, but hopefully someday it will work out.” 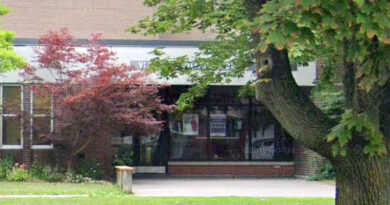