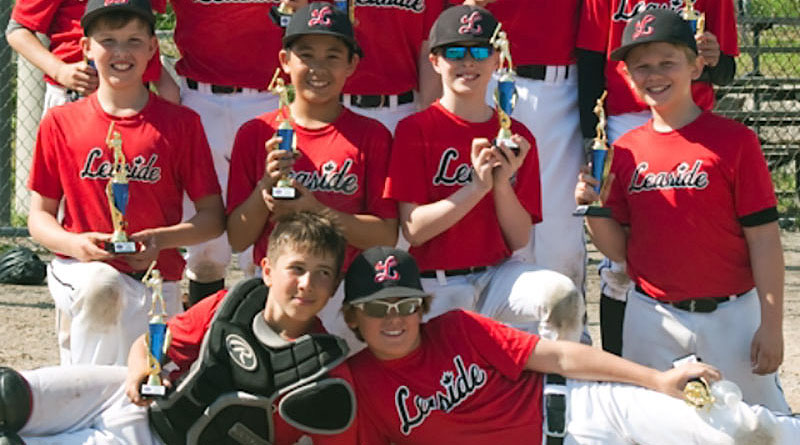 The 2017 season is shaping up to be an uplifting one for Leaside Baseball’s Minor Peewee AAA team.

Coach Lee Mosbaugh is the remaining coach from last year’s Major Mosquito team, and the team, with five fresh faces, won their first tournament of the season in Milton on May 28.

He’s noticed a fire in his charges and it’s one he’s pleased with.

“There’s a feeling that there’s a lot to prove,” Mosbaugh said, in a June phone interview. “I always joke, we’re talking about 11- to 12-year-old baseball, but there really is more on the line than I would have thought, and more for that age.”

It’s left an indelible feather in their caps, as Leaside went a perfect 5-0. All three games in the initial round robin stage were mercies, and they bounced North Toronto and Milton en route to the title.

The final game was a 7-3 win, but it was not without its drama.

Tied going in to the top of the sixth, Leaside knocked in four runs to move ahead 6-2. Both Milton and Leaside added one run each in the seventh. Leaside had 14 hits in the bout.

“We had a lot offence going,” Mosbaugh said. “We had one kid, Tiger Yee, who went 4-for-4 and he pitched three shutout innings as well.”

There’s a charge in his voice when he explained the turn around this year. One player, Brodey Bitove, is new to baseball, but is a natural athlete, playing AAA hockey.

It’s been a great ride so far, Mosbaugh assured, as the troupe is riding an eight-game win streak (including the five wins from the tournament).

“I love this team so much, I could talk about them forever,” Mosbaugh said. “The cool thing has been the transition from a not-a-good feel to the end of last season and working hard during the off-season.

“Just seeing the results has been a cool thing.”

Glover pitching his way to the majors

Year of rebuilding ahead for Leaside