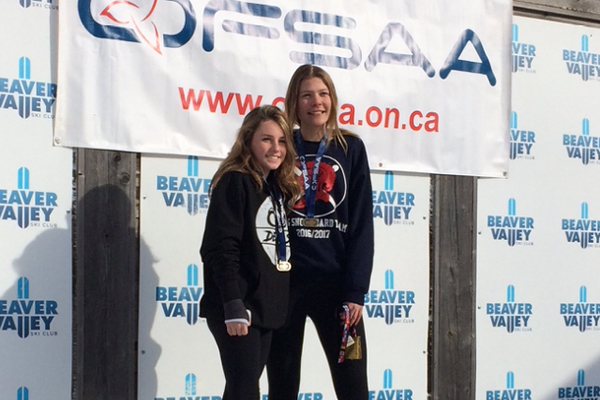 Mikayla Crawford wanted to follow in the footsteps of her older brother Matthew when she visited OFSAA for the first time.

The Northern Secondary freshman represented the Blue, Gold and Red for the first time in snowboarding, and garnered a gold for her efforts.

On her first run, she ran a 35.46, and then followed that up with a 40.74 for a total time of 76.20. She finished a whole .27 milliseconds ahead of second place opponent, Dillen Oliver of Oakville Trafalgar.

The 14-year-old said in an early April phone call that she was ecstatic to accomplish such a feat in her first season. Even more so to match her brother’s historic mark. In 2016, Matthew wrapped his OFSAA career with a silver medal.

“It is amazing. I am very happy,” she said. “The team that I went with was great. They cheered really loud, and definitely helped.”

The open division is for students who race outside of high school, and Crawford is a member of Beaver Valley. Some of her Toronto opponents are also teammates, and she admitted Jordan Tallis of Malvern CI in the Beaches is a good friend.

Tallis won the City championship early in March, but only by a snowball, as Crawford had a small mishap on the slope.

“It was a rutty course, because it was quite warm,” she said. “It wasn’t that big of a mishap. I put my hand down, and push myself back up. I didn’t lose momentum.”

The big difference for Crawford at OFSAA though, was her Beaver Valley coach, Cam Farrell, giving her a pep talk before her second run.

“He told me to get into the right headspace before my second race,” she said. “He told me there was one gate I needed to get to win, and I nailed it.”

She said she’s definitely looking forward to keeping up podium appearance for the Red Knights in the future, after all OFSAA is pretty fun.

Of course, the team, helmed by coaches Andrew Primmer, Michael Chapman and Kathleen French, will be the biggest draw.