Video game technology has skated circles around the simple push one button, move a joystick trailblazers of the early ’80s.

That was evident down at the Hockey Hall of Fame in August as Wii and 2K Sports representatives were on hand to show the public and Canadian Olympic gold winner Rick Nash a thing or two about the simulated hockey world of NHL 2K11[/url].

Nash, also a member of the NHL’s Columbus Blue Jackets[/url], is still getting used to seeing his likeness in video games especially after appearing on NHL 2K9’s cover.

“You know, the first couple of years were a bit weird,” Nash told the Town Crier. “My generation grew up playing video games and to see yourself in one … it is very surreal.”

Mike Rhinehart, senior brand manager for 2K Sports, said getting as close to reality is what designers were shooting for.

“We have a thing this year, because we’re only on Wii, we were able to concentrate more on just one platform and really pump the most graphically out of this,” he said. “So you’ll notice the difference between the later game graphically with the faces, ice reflections, player likenesses, animations.”

Most importantly is the full simulation.

Players of NHL 2K11 will use the nunchuck attachment with the traditional Wii controllers to direct skaters on ice. With a simple flick of the wrist you can go top shelf or stick side on the hapless goalie that’s between you and your chance to score a Bobby Orr style Stanley Cup winning goal.

“You literally have one-to-one motion control,” Rhinehart said. “You can even scoop the puck up off the ice if you’re a skilled player.”

The response from the professional ice denizen?

“It’s super cool. I mean just the stick handling it takes a while to get used to, but once you get the hang of it, it can be a lot of fun,” Nash said. “You can take shots, flip the puck up, I think kids are going to have a blast with it.”

Judging from the small crowd gathered in the back of the Hall, kids could hardly wait, especially Seth Martosh who was at a loss for words when asked about experiencing two of his favourite things: meeting a hockey player and getting to see the new hockey game.

Though Seth may look to play as the Pittsburgh Penguins in the new hockey game, Nash says he’d venture elsewhere.

“It’s tough to say. If I need a guaranteed win then I’d go with Canada, but if I’m going for the Stanley Cup, definitely Columbus,” he said, adding on ice this season his NHL team looks to build on their success from two years ago and make it back to the playoffs.

“We have to. With (Ethan Moreau) on there hopefully he plays a huge leadership role in the dressing room and with his defensive play on the ice,” Nash said. “We have to get back to the playoffs and make a little noise once we get there.”

Regardless of the real or simulated hockey worlds, Nash enjoys the experience of getting out to meet the fans.

Seth walked away with a signature from Nash, a smile on his face. 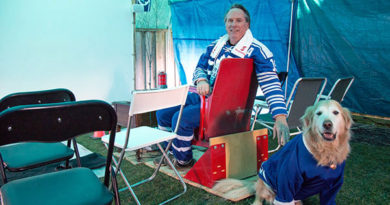 Goliaths give Malvern a scare

Move to rename dressing room No. 5