Riverdale forward Michael Brown was taken to the earth so hard and fast during the first half of a match against Central Tech Blues May 11, the only sound heard was a muted pop.

When the wreckage of rugby players was cleared, they found him body prone, a sure sign that the collision was more than the “faking” that Central Tech students muttered from the stands.

His injury would pause an already 14-0 Blues-controlled game for about 45 minutes, including a 20-minute wait for emergency medical crews.

Raiders coach Dave Robb was unsure of the extent of the injury, but acknowledged it may be a broken arm, adding Brown was active athletically during the week.

“This morning he ran the 400-metre hurdle out in Etobicoke for the Toronto finals,” Robb said. “Yesterday he did another event. Today he came to rugby and he was supposed to play rep soccer in Orillia at 7 p.m.”

Ambulance attendants ensured the safety of the young man before taking him to the hospital.

“It’s a standard practice to stabilize him,” Robb said. “It wasn’t any sort of extravagant injury but a broken bone can lead to arterial bleeding so those injuries are taken very seriously.”

Returning to the game for the second half, Riverdale seemed unfazed by their teammate’s battle wound, pressing the Blues at their Bathurst and Harbord home.

Still, two additional tries were tallied for the Blues while the rain beckoned.

When the game finally broke, Robb was focused on his injured forward, but commended his charges for overcoming adversity.

“We’ve got a good group — they’re mostly kids from grade 11,” Robb said. “They’ve got good spirits but they have to develop a little as a team.”

Getting to the end zone for the Blues were Elijah Marcus, Adrian Cirolico, Troy McConnell and Jordan Ribeiro.

Coach Fred Brown was impressed by his team’s efforts in a tough division.

“All I can say is we finally won a game,” he said. “They followed the game plan.”

In a week’s time the two teams will return to the same field to ruck it out for Tier 2 playoffs.

“The top four go to Tier 1, and the bottom two play off for Tier 2,” Brown said. “It gives the boys opportunities to carry on a little more.”

Robb said he’s looking forward to a rematch, a chance to win one for their wounded Raider. 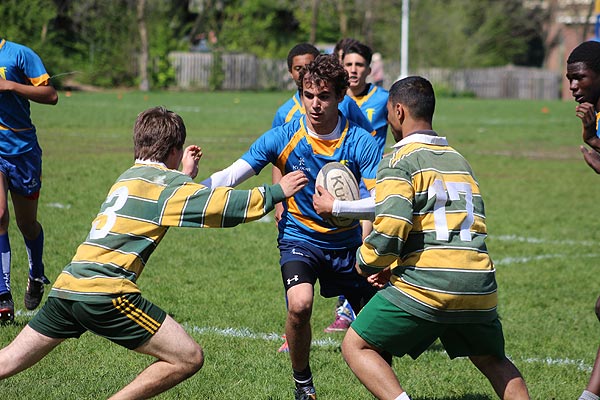