“I’ve played basketball for each of my four years here, volleyball for the past two years and baseball I just played this year,” he says. “I’ve always played basketball since I was little, volleyball I picked up because all my friends played and I just wanted to try it and baseball because it was my last year and I just wanted to try something new in the spring.”

Unfortunately, while his teams played well, they didn’t come away with any gold medals this year.

“Volleyball, we made it to our south region finals and we got silver,” he says. “And for our city OFSAA qualifiers we lost our first game.”
Yuen has been inspired by many coaches, including Ryan Wakelin.

“[He] is one of my favourite coaches,” he says. “He’s coached me in basketball and volleyball. He has been very supportive and he’s a great teacher when it comes to teaching fundamentals and helping you get better.”

He’s gotten really close with all the coaches, though hasn’t been coached by all of them, he says.

“I’ve gotten to know them and we’ve become a really close-knit family and I’ve learned a lot from each of them.”
Yuen is also a star off the court with an academic average of over 90 percent.

In fall Yuen is headed to the Rotman School of Business at the University of Toronto. He plans to play basketball at university.

“I don’t think I’ll be playing varsity sports,” he says. “But I’m for sure going to do intramurals.”

Riverdale C.I.’s female athlete of the year strides confidently onto the field, laughs as she unlocks the gate and starts to kick around a soccer ball.

“Whenever your nominated for something you’re always like ‘I’m never going to get that’,” Jenn Yee says. “But I was really happy when we did.”

“I’ve been playing soccer and hockey forever. I picked up field hockey in grade 9 and I just fell in love with it,” she says. “I’ve been on the teams every year since I’ve been in grade 9. We’ve had our ups and downs in the past years but this year was a really great year for sports.”

She is particularly pleased with how her soccer team fared this year.

“[We] went all the way to finals, but we lost in overtime,” she says. “The whole season was just amazing. I just love the girls so much.”

While she’s had many great memories with all her sports, what she’ll remember most didn’t take place on the field, the rink or the pitch, Yee says.

“We were having our [soccer team] party and we watched She’s The Man in the auditorium.”

“She’s pretty feisty,” he says. “She’s a good leader of the court as well.”

In fall, she will head to Western University to study kinesiology and plans to try out for the field hockey team.

Until then she plans to spend as much time as possible with her teammates at Riverdale.

“I love them all to death, especially my soccer team,” she says. “I’m just going to be devastated when I’m gone and not with them.” 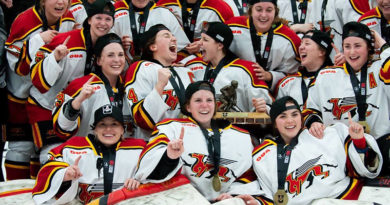