A little bit of Wimbledon action is coming to midtown.

May 1 was game, set and match for the opening of Toronto Tennis City[/url] at Greenwin Tennis Club.

President Pierre Lamarche is eager to start serving the community after opening a second branch of the Burlington based, nationally respected program All Canadian Experience.

“We have a tennis school … which has many of the top players in the country and has been involved in player development for years,” he said. “We wanted to be able to offer our services in Toronto because we have a lot of customers that come to Burlington and we wanted to be able to offer the opportunity to kids to get the same opportunity in Toronto.”

Helping him is multiple winner of Tennis Canada’s coach of the year, Ben Armstrong, who will take on the director roll.

“I’ve worked at Mayfair and up at Tennis Canada, but this is the first time (in Toronto), and hopefully it provides a great place for the juniors to train in the downtown area,” he said.

Starting at York University’s National Tennis Centre and moving to Burlington’s Cedar Springs Health and Racket Club in 2000, the Toronto offshoot is a chance to reconnect with a bigger population.

But there is a limit he said with only 400 memberships available. A nominal one-time fee of $1,000 is also charged for new additions.
Once the foundation is set, Lamarche said reaching out to community is next.

“The plan is to find other satellite carriers where we can be two-fold: one is to promote the game,” he said. “The game is quite costly at the upper echelon of development, but it would be great to introduce programs that are free across the city for kids to have access.

“Rather than trying to find the best athletes, there are so many good athletes in the Toronto area and being able to offer them an opportunity to develop and grow into tennis (is great) for scholarships.”

A little help at the bureaucratic level would be much obliged, Lamarche added.

“In this country sports are not really well supported as it is in other countries,” he said. “We have such a great country but sports is not one of the priorities and I can understand that.”

Regardless of any faults, Lamarche is willing to produce the next crop of Daniel Nestors and Aleksandra Wozniaks.

“It’s wonderful to be in Toronto and to have access to all kinds of people that are going to help kids,” Lamarche said, adding Armstrong is key to Tennis City’s mantra.

Training tomorrow’s stars of the clay, turf or grass is not easy.

“You have to find kids that are motivated, self-motivated usually,” Armstrong said. “If they are externally motivated by parents or other people it doesn’t usually last very long.”

Still Armstrong said if a youngster has the tenacity, much like the rising ace Dominique Harmath, whom he coaches, they will break the deuce.

“Kids want a quick fix, but you’re not going to get that in one day,” he said. “I think with tennis, especially with some other sports like golf and so on, it takes many years of hard work and being patient.

“Everything else, if you work hard enough, and as long as it’s physically possible, you can develop it.” 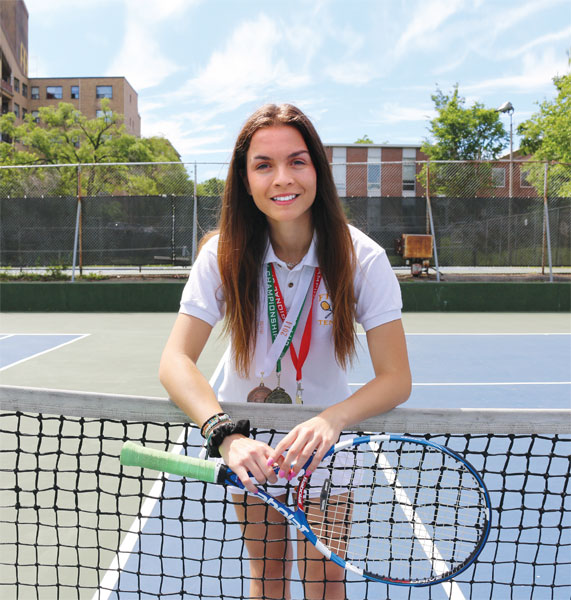