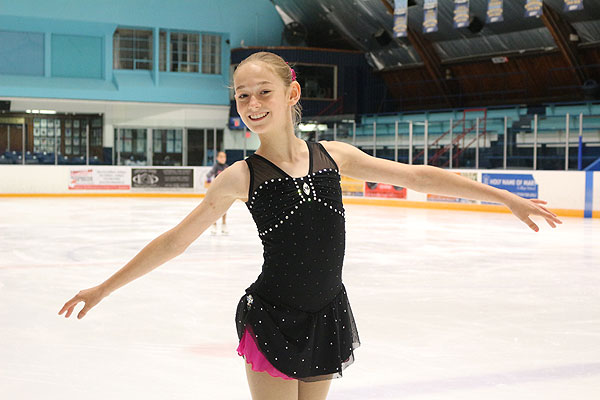 While most of her friends are outside, enjoying the hot summer sun, Forest Hill Skating Club member Ava Smale is inside arenas, honing her interpretive dance skills.

The 12-year-old was at practice on Aug. 1 at St. Michael’s Arena. Mom Anita and dad John were in the stands, watching their daughter prepare for her second sectionals, coming up Oct. 30–Nov. 1.

“She’s been skating here for five weeks at this camp, and then they’ll find ice elsewhere,” Anita Smale said. “Where most of your friends are out having fun, we’re in arenas, but we will take some vacation.

“You plan your vacation around summer competitions and summer training.”

The hard work has  paid off, though. On May 16-17, Ava Smale earned herself a handful of golds at the Skating Club of Western New York’s Spring Skate Festival in Buffalo.

“It felt really good because I had been working hard for that moment, and I felt like I really succeeded,” she said, taking a pause from her skate. “I’ve learned it’s not always about winning and to try your best, improving and getting better.

“Basically, you’re competing against yourself.”

A new scorecard system, similar to that used by Skate Canada for the Olympics, has allowed her to keep tabs on how she does at events.

“She’s competing at the pre-novice level, so she’s trying to improve her scores and move up the rankings there,” Anita Smale said. “You do tests as well. This past season, she got her gold in interpretive test, and now she’s working on gold in her freestyle test and her gold skills and then senior silver dances.

“These are all extra things you do, and train for on the side.”

Ava Smale stays focused through looking up to her heroes, Shae-Lynn Bourne, Kaetlyn Osmond and one of her mentors, coach Brandon Herdman.

As for what music she likes to skate to for her interpretive dance, it’s anything by Katy Perry.

When it comes to singing praises, however, Forest Hill Skating Club coordinator Valerie Calver was quite vocal about the evolution of Smale as a skater, as well another club member, Julia Funk, who have both competed at sectionals in the last year.

“It’s representative of the club, and the training programs that we have,” Calver said, in a phone interview. “And that coach Janis Coyle is proud of her progress.”

Coyle, who was at St. Mike’s Arena, also voiced her pleasure.

“We’re hoping this year she finishes in the top three at pre-novice,” she said, adding Ava Smale was working hard on her double axels and her triple salchow.

Ready to showcase their on-ice talent

Local skaters getting in synch for winter competitions