In a neighbourhood as diverse as any in Toronto, bringing tennis to Thorncliffe Park has been tough for its home club.

The Thorncliffe Park Tennis Club, with a tradition of teaching tennis to low-income families and playing tennis at a competitive level across the region, is decreasing in membership numbers.

“It’s hard for us to maintain members at this club,” said the club’s president, Christine Barachina. “This area, it comes from new immigrants, people come and they go, they don’t stick around at this club long enough to make that formal commitment.”

The club is not standing idly by as their club disappears like their sister club, the Flemingdon Park Tennis Club, many years ago, Barachina says.

This year, the club wants to push the envelope. While they have provided lessons to young recruits in years past, this year they are looking to provide free membership to kids and multiple lesson sessions over the summer via funding from Canadian Tire’s Jumpstart Foundation.

“We’d be catching that many more children,” said past president Rita Lee, who has been helping to secure the funding. “We have the capacity to, possibly, if we had 20 kids a week, we could see, in a month, 80 kids.”

With the help of the Thorncliffe Neighbourhood Office, the club is looking to recruit several hundred kids, primarily through the Thorncliffe Park Public School, which Lee says is one of the largest elementary schools in North America.

With a small, loyal membership base and six readied courts at the foot of Leaside Park Drive, the club may not be as affluent as Davisville or Leaside clubs, but they provide a service to a large number of kids.

They also fight a battle of perception on many fronts. In this area, cricket is king in a neighbourhood with a prominent South Asian community.

“There isn’t very much for kids to do in the area, there’s a cricket field down the street, and cricket is first and foremost for this population, in terms of sport,” Barachina said. “Any kind of avenues in this area, to get them out [and taking part], we’ve provided that to the community.”

“There’s an image, [some people] have a perception that [Thorncliffe Park is] a dangerous place and it isn’t,” said Lee, who is a member of Leaside and Thorncliffe clubs. “I know that the Leaside people will not take the five minute drive to Thorncliffe. They’d rather wait on a three-year waiting list than do that. But, that’s their choice and it’s a completely different club.

It’s a mentality that wants to grow and maintain tennis in a neighbourhood that values where they place their hard-earned wages.

“It always ends up being, after some time, limited because there is a membership fee,” said Ahmad Hussein, director of programs at the Thorncliffe Neighbourhood Office. “If history is something, that might come up with some people and they don’t have that $50 for membership.

“But we were telling families, ‘Okay, if any of you get a free opportunity to do it, maybe that’s not a bad thing. Why don’t you just explore it?’ ”

The kids absolutely love the club, and Thorncliffe Park hangs their hat on a loyal membership that reaches out to teach and supervise these kids each summer.

“The members are excited, it’s a new year, we’re painting our clubhouse, that clubhouse hasn’t been painted since 1990,” Barachina said, chuckling.

Also, on Apr. 13, the club will have a season opening celebration at the courts, launching what promises to be a fun summer. 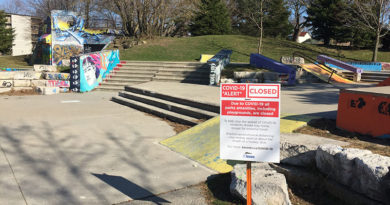