Standing just under 5-foot-7, and carrying a Hoyt bow, Olympic archer Crispin Duenas is intense in competition, and humble in defeat.

At the London Olympics, seeded eighth in a field of 64, Duenas was upset in the first round of competition, losing three sets to one.

“It was tougher than I expected,” said the North York born Duenas, citing a tricky, swirling crosswind that affected his shots.

“I know that I can be the best, but it’s the Olympics, and everybody here is really good. I can’t let this discourage me from shooting. This is just another thing I can learn from. It’s not like the end of the world.”

It is this attitude that has seen Duenas, the two-time Canadian champion, persevere throughout his career.

Inspired by the fictional hero Robin Hood, Duenas, a keynote speaker at the 2009 Town Crier Athlete of the Year Awards, began pursuing competitive archery at 13. He joined the national team in 2002, competing in the Outdoor Target specialty.

“He’s been really lucky because he comes from a very caring family, but one which always supplies discipline,” said coach Joan MacDonald, who met and began training Duenas’ at 14. “That’s a dynamite combination if you find it.”

Prior to the London Olympics, Duenas’ discipline saw him training six days a week — half of which was devoted to strength and conditioning as he exerts 50 pounds of torque from his bow and arrow over 300 times a day.

“Although I don’t have any superstitions, archery is a sport of repetition,” Duenas said. “Therefore, I am making sure that everything I do to shoot my perfect shot comes with a myriad of set movements/thoughts that are the same every time.”

Through hard work, Duenas was placing high in tournaments in 2007. That year, he grabbed a silver medal at the Pan Am Games in Brazil.

“He got very good very quickly,” MacDonald said. “Then, as often happens when people rise quickly, they hit a bit of a plateau.”

A short exit from the Beijing Olympics, finishing 11th, was a tough pill to swallow, and left Duenas at a crossroads.

“Getting him out there in the real world, and finding out what’s really going on out there — and not just what’s going on in Canada — certainly took some time,” MacDonald said.

Duenas struggled with that prospect, but MacDonald was heartened by his work ethic.

“I never had to say ‘Crispin, have you done your exercises today?’ Never,” she said.

Duenas overcame the frustrations to win the Ontario Spring Classic in 2009 and the Canadian championship in 2010.

Going full circle, Duenas capped a solid 2011 season with a second silver medal at the Pan Am Games in Guadalajara.

“The individual medal came with more of a sense of self accomplishment and being able to say ‘I did all of this,’ ” Duenas said. “Also, winning the medal felt right, like it was supposed to happen.”

His Pan Am win clinched a qualifying spot for London, where he was one of two Canadians — Marie-Pier Beaudet is the other — in the individual archery competition.

While it was a tough first round loss, but Duenas is nonetheless honoured to represent his country.

“I think that it’s a great honour to my parents to be able to see their son (and a Filipino) compete with such a diverse group of athletes on team Canada,” said Duenas, who begins teacher’s college this fall.

“I think it shows the ‘real Canada’ with how many different cultures and people we have on our Olympic team.

“Our Olympic team will show the world that we, as a nation, can achieve.” 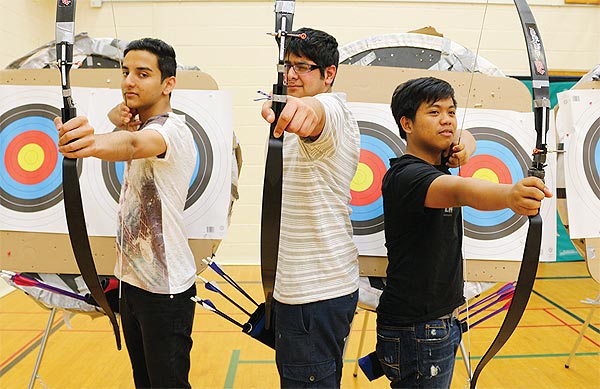